Boxing is one kind of combat sport where two people fight each other with gloved hands. Their main target has been knock down the opponent. It’s also known as Pugilism. The boxing came from Prehistoric age. Nowadays, it has become more popular over the world. And it’s popularity is increasing day by day. The boxing competition is divided into different classifications which are held throughout the world. They are Light Flyweight, Flyweight, Bantamweight, Featherweight, Lightweight, Middleweight, Heavyweight and so on. Many boxers have become famous and earned huge amount of money through this kind of championships. WBO Jr. Welterweight championship is one of the most famous and renowned championship in the boxing world nowadays. World Boxing Organization, simply known as WBO. There is a boxing match between two famous player named Henry Lundy Vs Terence Crawford will be held on 28th February 2016 in New York. 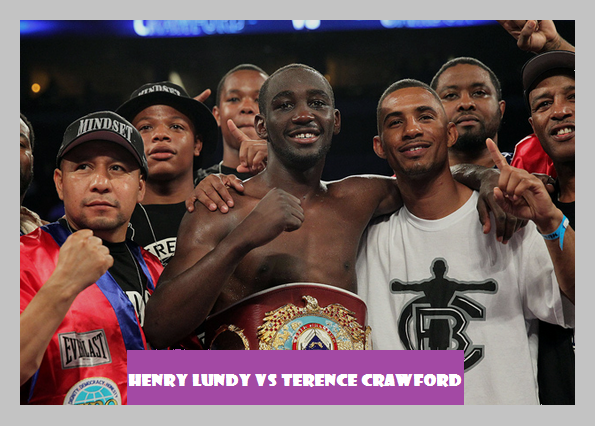 Henry Lundy is also known as Hank Lundy, who is an American professional boxer fights at light welterweight. He is a former NABF and NABO lightweight champion, the current World Boxing Council Continental Americas lightweight champion. Lundy is currently standing on the 15 position in the world among lightweights by the World Boxing Council (WBC). Lundy has won four of his last six fights. Lundy is an worthy fighter who has fought with some famous fighter including David Diaz, John Molina and Raymundo Beltran. Lundy moves fast enough in the ring and has quick hands that help him on offense and defense. This will be Lundy’s third fight in New York.

The current WBO Jr. Welterweight / Super Lightweight champion is Terence Crawford. He is the famous and well known American professional boxer who is well known for his fast, hard hitting and highly specialist fight and for his unique ability to comfortably switch hit from orthodox to southpaw. Crawford is one of the most balanced fighter in the boxing sport. He can hurt with an offensive attack or on the defensive end where he picks his spots. Crawford is great at controlling a fight and he could take advantage from the opponent according to the chances. Crawford do not has many weakness like others without only one fact that he can start off a little slow at times. This will be Crawford’s first fight in New York.

According to the game summary of both two players, it is proved that they are both great player in this time being. So, their next match will be hard contesting. They both are looking forward to this match and get well prepared. This is one of the big match for all boxing lovers and they must enjoy this such kind of exciting match.