Afghanistan national team is conducted by the Afghanistan Cricket Board (ACB). Afghanistan is considered as the new rising power of sub-continent in cricket. Afghans played cricket since mid 19th century but they didn’t get any notable success for a long period of time. But since last couple of years they have got quite a lot success. They are yet to get the test status but they already have played in ICC Cricket World Cup 2015 & has secured their first win in the cricket world cup by beating Scotland. 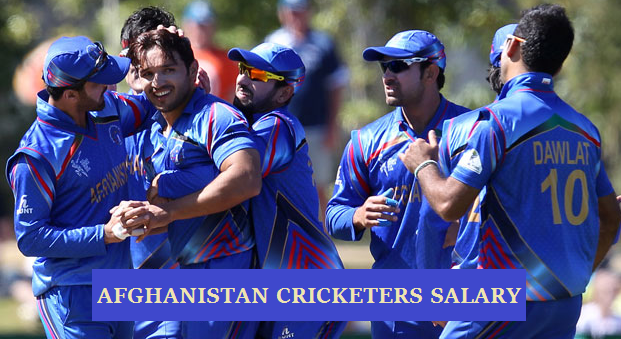 How much they earn: The Afghan Cricketers earn USD $400 to USD $700 per month based on seniority. In the last six months, Afghan cricketers have refused to sign the new contract, where they were offered USD $400 to USD $700 a month by the board. The players demanded USD $1,500 as monthly salary. Telecom group Etisalat sponsors the Afghanistan cricket team & the cricketers want a larger share of the sponsorship money. ACB stated that  the decision to increase the monthly salary of the players, has been taken under consideration.

Chart of Afghanistan Cricketers Salary in 2019

Afghan Players in Foreign Leagues : Alongside National Team, Afghan cricketers also played in different T20 leagues in the world. Afghan cricketers played in their domestic T20 tournament Shpageeza Cricket League. Some Afghan cricketers also played in BPL & PSL. Mohammad Nabi is the most experienced player of the Afghan side. Nabi has played for Quetta Gladiators in the inaugural edition of PSL. Nabi has played for 3 different franchizes in BPL. He appeared for Sylhet Royals in the 2nd edition of BPL. Then he playecd for the Rangpur Riders next season. In the ongoing BPL 4, Nabi has signed for Chittagong Vikings.

In the 4th edition of the BPL, Afghan Leg spinner Rashid Khan has been picked by the Comilla Victorians. Afghan wicket-keeper batsman Mohammad Shahzad has featured for the Rangpur Riders.

Afghan Pacer Shapoor Zadran & Hamid Hassan also had the taste to play in BPL. They featured for Khulna Royal Bengals & Barisal Burners respectively in the 2nd edition of BPL.

Afghanistan cricket team has done very well in the recent years. They have improved a lot. Afghan Cricketers have started getting calls from the foreign leagues & their earning is increasing. Afghan fans are loving cricket more. All the things are looking positive for the war-torn country.