Australia and Sri Lanka played 3 test, 2 One Day International & 2 Twenty20 series between them in December, 2012 to January, 2013 where Aussies won test series, ODI series were drawn and lost the t20 series. That cricket tournament was hosted in Australia. As like that tour, ICC going to arrange another same amount of matches series between Sri Lanka and Australia in upcoming July – August, 2016.

After the ICC world twenty20 in India, Aussies played an outstanding tri-nation series in West Indies and Lankan team performed in English ground. Cause of both team recent days good performance, this is going to be a big series definitely. This tour Schedule announced by ICC around 2 years ago by the FTP chart. The Lions are eagerly waiting to play against most time world cup winner Australia in home ground and want to take revenge as well. 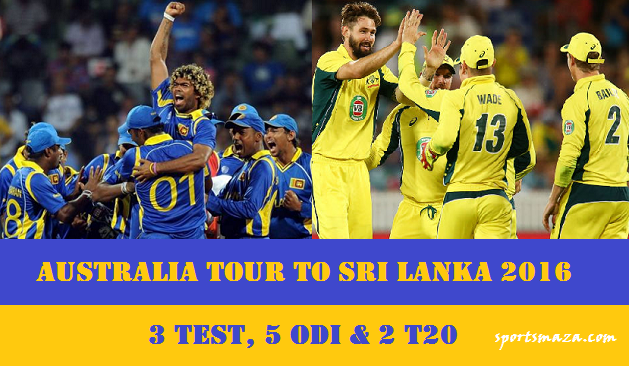 [Final fixture will declare around March-April, 2016. Just after getting the announcement, Time, Date & Venue will be updated here]

In the last year, Sri Lanka lost their best performing senior cricketer Kumar Sangakkara and Mahela Jayawardene due to retirement which made lacking of experienced player into their team. Though still they have a couple of cricketer those played more International match and performed well in T20 world cup in India. That’s why they are enough confident for this series.

On the other hand, Australia is unbeatable from 1999 world cup. Though their current performance isn’t like past few years but still the most leading and balanced team for every format of cricket.

Very surprising statistics. Isn’t it ? SL still now won only 1 test against Aussies. By playing 26 match in total, Lankan team winning statistics is extremely poor. Into their last test series in the year 2012-2013, Australia won in every test matches as well. Though the lions have a balanced team that time but can’t did well in Australian ground. ODI statistics mentioned that the performance of both team is approximately same. Though Aussies won more matches but it’s need to know that SL started to perform well few years back where team Australia is the most oldest cricket nation. We should keep ahead the Lankans in twenty20 format. They are the highest performer in ICC world twenty20 still now and their winning records against Australia is too high as well.

To provide this H2H stats were required to understand the prediction of this tournament. On the basis of recent days records of both team, considering host nation and experience, we should keep ahead Australia for Test & ODI series. Possibly the lions will played world-class cricket in t20 matches.

Possibly the team squad of both team will be same like Aussies Tri-nations series and Lanka’s English tour. To get the up to date players list for this “Aussies tour to the Liones” series, can keep eyes on SportsMaza.com.