BCB tried to increase the salary and total contractual player list but cause of budget and investment there have 16 cricketer only those were get month salary. But from the year 2017, total contract increase by BCB where 16 cricketers right now receive monthly payment by the government. Few months back, BD government increase the pay scale of all govt. employees and this benefit also get national team players as well. If any cricketer retire by playing in national team, they will get pension and other benefits as like other government employees. 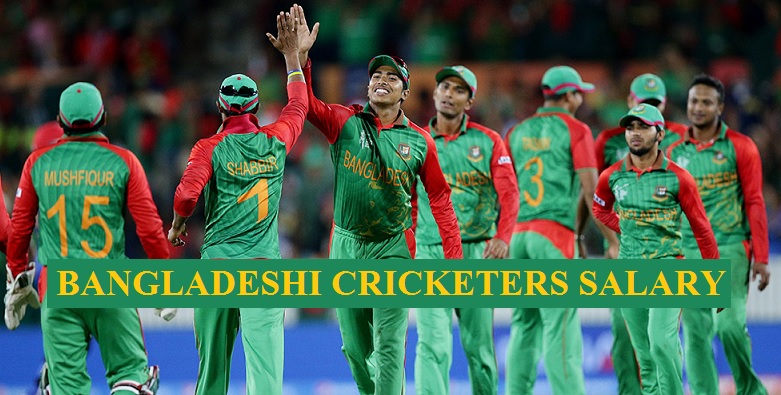 The salary of Bangladesh National Team Cricketers are divided by some categories. These are A+, A, B, C and D. Currently there have 15 cricketers signed with Bangladesh Cricket Board (BCB).

Besides monthly fixed salary, cricketers also get paid based on per match. Also get money by good performance like winning a trophy or when become player of the match. Government also announce some additional facility by offering home and car etc. 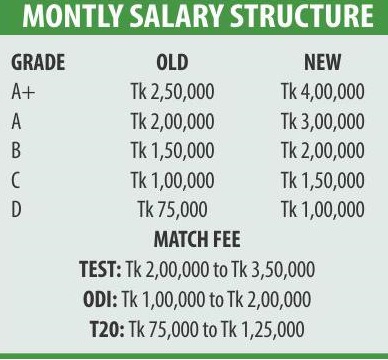 On the other hand, icon player like Shakib Al Hasan earn from different League crickets. BPL & IPL are two of the most efficient platform for players to earn more money. Also Pakistan arranged league Pakistan Super League (PSL) where Tamim Iqbal, Mushfiqur Rahim, Shakib Al Hasan and Mustafizur Rahman have already made a covenant to play with them.

In Pakistan Super League (PSL), the player is divided in three categories named Platinum, Gold and Silver according to their performance. In Platinum category, a player will receive USD $140,000, in Gold USD $50,000 and in Silver USD $ 25,000. Famous all-rounder Shakib Al Hasan is going to play for Karachi Kings as a Platinum, Tamim Iqbal with Peshawar Zalmi as a Gold, Mustafizur Rahman with Lahore Qalandars as a Gold and Mushfiqur Rahim is going to play with Karachi Kings as a Silver in exchange for their paying scale.

Excepting these league crickets, a Bangladeshi player earn more from ODI and Test cricket matches. Each Bangladesh National Team Cricket Player’s get 3.5 lakh for an International Test, 2 lakh for a ODI and 1.25 lakh for a T20. Excluding this fee, there is also different awards like Player of The Match, Player of The Series and so on. State Minister for Youth and Sports named Sri Biren Sikder told in Parliament that every cricketer of Bangladesh National Cricket Team earns TK. 80 lakh to TK. 100 lakh in a year.