Bangladesh and Zimbabwe both playing this series to prepare them for T20 WC. After winning first 2 match, tigers were little bit more confident and give rest few of their icon cricketer like Mustafizur Rahman, Tamim Iqbal, Alamin Hossain, Musfiqur Rahim (injured) for the 3rd t20 match against Zimbabwe. Though Bangladesh captain Mashrafe Mortaza and team managers were hopeful enough with 4 debutantes Abu Hider Rony, Mosaddek Hossain Mohammad Shahid and Muktar Ali but finally match result shows that it was a bad decision by team tiger. 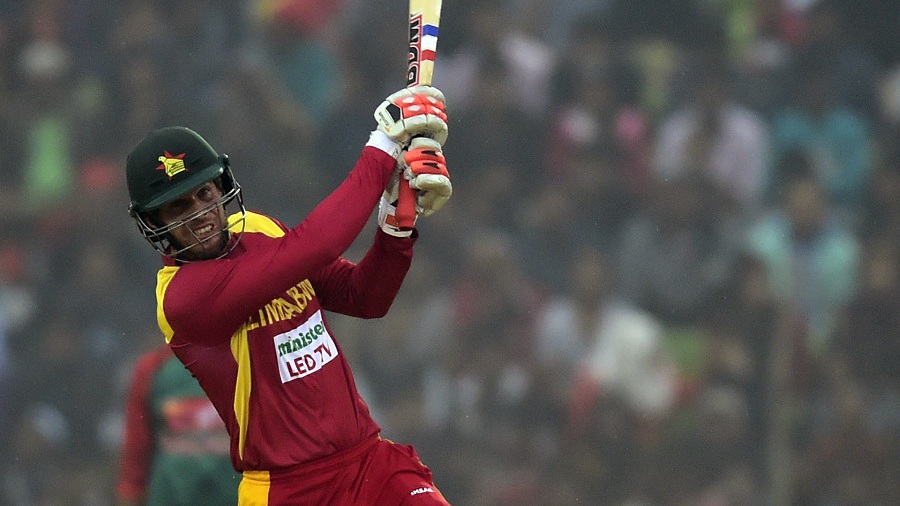 Waller honoured Player of the match

After winning the toss, Zimbabwe captain and more experienced batsman Hamilton Masakadza elected to bat first. Sibanda, Masakadza, Williams, Waller & Mutumbami’s good contribution help Chevrons to achieve a good total within 2o over. Surely, 187 in total was a big score in front of tigers. Every bowler from Bangladesh side were much more expensive today. Comparatively, Shakib al hasan bowled little bit well then others and took 3 important wicket.

Though it was a tough job to reach 188 target but tigers were confident enough. Fans also little bit encouraged to understand the real twenty20 batting performance and ability of BD cricket team but again they proved that still they are not suitable for t20 cricket still now. Though as usually Sabbir Rahman & Soumya Sarkar bat well for them but Shakib al hasan, Mahmudullah Riyad & Imrul Kayes were inanimate. After playing well in BPL T20 and took chance in national team, wicket keeper, batsman Nurul Hasan scored few boundary into the finishing of the match which won’t enough to ensure win for team tigers.

Match between – Zimbabwe Vs Bangladesh

Team Bangladesh playing with Zimbabwe 4 match t20 series at Khulna, Bangladesh. Into the first two match Bangladesh won by 4 wickets & 42 runs respectively. This series 3rd match held on today 20 January, 2016 which match would finally release the result of the series. After winning first match, Bangladesh were little bit more confidence. Though the first match winning was a tough job for tigers but into the 2nd match, Bangladesh team played extremely outstanding cricket. Specially the performance of 42 runs & 3 wicket by Sabbir Rahman was a great come back for him. However, great come back by Zimbabwe.

This twenty20 series is much more important for both team Bangladesh and Zimbabwe as the T20 world cup is coming soon. This two team also need to play qualifier round to finally qualify for ICC T20 world cup 2016. After playing Bangladesh Premier League (BPL), tigers are little bit more confidence where Zimbabwe is little bit nervous of tigers ground.

Into the first t20, sensible batting by Hamilton Masakadza & Vusi Sibanda guide the Chevrons to collect 163 total in front of Bangladesh which was definitely a fighting score against them. But experienced batting by Tamim Iqbal, Musfiqur Rahim, Shakib al Hasan & Sabbir Rahman helped tigers to ensure tight win over Zimbabwe. Into this match Bangladesh reach to the chase target just before 8 bowl remaining and few of extra runs by Zimbabwean bowlers help them to get this win.

2nd match was a one sided match. After winning the toss, Bangladesh elected to bat first and professional batting by Tamim Iqbal, Sabbir Rahman, Soumya Sarkar, Shakib al hasan, Musfiqur Rahim helped Bangladesh to score 167 runs total against Zimbabwe. After doing bat well, Sabbir Rahman also took 3 wicket by bowl in hand. Mustafizur Rahman’s every bowl was frightened Zimbabwean batsman. 4.95 economy rate in twenty20 showing the refection of his bowling performance of this day. Though he can’t take early wicket cause every batsman usually face his bowl very seriously and just for save their wicket. But just when Zimbabwe needed couple of run and Mustafizur in attack, he took double wicket in single over which was the finishing situation for Chevrons. Zimbabwe all out just on 125 runs and Bangladesh achieve their 2nd victory against into the series.

One more match left of this series and most of the cricket predictor thinking about a whitewash by tigers. In upcoming march, 2016 ICC World Twenty20 will be held in India where 8 teams initially face for playoffs match and only 2 of them will join into the final event. This is why BCC & ZCC elected to play twenty20 match into this series and make them ready for the biggest twenty20 world tournament.

Though the performance of tigers is well in ODI cricket but still their ranking in point table on No. #10 and their rating have far difference against 9th position Afghanistan. It’s need to mention that Zimbabwe, Bangladesh & Afghanistan is the most favourite among all other qualifier round match playing teams of ICC T20 world cup 2016. You can also take a look into one of our feature where wrote about the prediction of world t20.