The Big Bash League which is entitled as KFC Big Bash League is an exotic T20 based, domestic cricket league of Australia. The new feature of the BBL competition started from 2011 where they consecutively finished the 5th edition. It will be the seventh edition of the biggest competition which going to place on late December to January. As well this season the tournament appearances eight franchises in again. 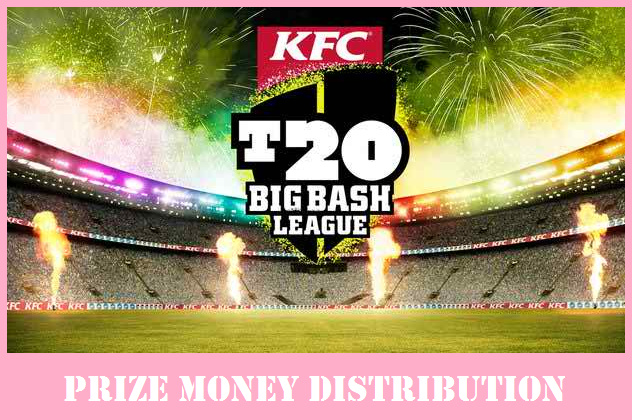 BBL is the most wanted cricket tournament in Australia which considered as the second most popular t20 club-based tournament in the planet. Besides of the local players numbers of cricket legend from different state have taken part in the competition. The most eye-catching part of the emulation is to watch playing the star in together. Like Chris Gayle , Kevin Pietersen, Shahid Afridi, Kumar Sangakkara, Kieron Pollard and also many others cricket legend participates on the event in every year, where the T20 specialist are paid a high amount of money. Here performing all cricketers are individually paid a good amount of money. Apart of the players the winning team along with the runners runners-up team are also bestowed a huge amount of prize money for their greater success. The last season total amount of Prize money ponder of $890,000 for the top four finisher which are split into as follows

On the above of the table, the required amount is increased up to $290,000 which is reportedly enhancement to 25% from previous two season. This year it has been decided by the Australian Cricket Board the award money will be increased to 25%.

The prize money which is conferred for the upcoming season approximately 30% less than Indian premier league. Undoubtedly IPL is the most popular and costly limited over game in the world. No other domestic games in the world as expensive as Indian Premier League. Despite of domestic tournament, it treated as the International cricket for the costing of money. After IPL Big Bash is the most watching domestic feature cricket tournament.

Sydney Thunder became the defending champion of BBL competition, who grab the  title for first time in previous season. The team won $450,000 for their massive achievement. On the other hand Melbourne Stars were paid of $260,000 (Aus) for their consisting position off runner-up.

Out of eight participants, only fours have able to snatch the title for once and the other four yet not able to win the title for a single time. The Perth Scorchers franchises become the most successful team in Big Bash history who consecutively bears. They also hold the record of first runner-up in 2011.

Sydney Sixers also the franchises who grab the BBL title in debut season and Brisbane Heat grab this in the second season of 2012–13. So guys let’s see what happen in this season, who will be the next winner of the tournament.