The Caribbean Premier League, simply know as CPL T20 is an annual Twenty20 cricket tournament held in the Caribbean. CPL T20 is one of the most biggest professional T20 cricket tournament which next season will start on coming July 2016 sponsored by Hero MotoCorp which is officially titled the Hero CPL. Six teams will participate in this tournament. Barbados Tridents is one of the most strongest and successful pretender of this CPL title. The Barbados Tridents are the representative team of Barbados in the Caribbean Premier League. The origin of the name Barbados is either the Portuguese word Barbados or the Spanish equivalent los Barbados, both meaning “the bearded ones”. Barbados’s most famous cricket ground is the Kensington Oval located less than a mile from the heart of the capital of Barbados, Bridgetown. Barbados is the home of Sir Garfield Sobers, who is generally regarded as “the greatest cricketer the world has ever seen”. 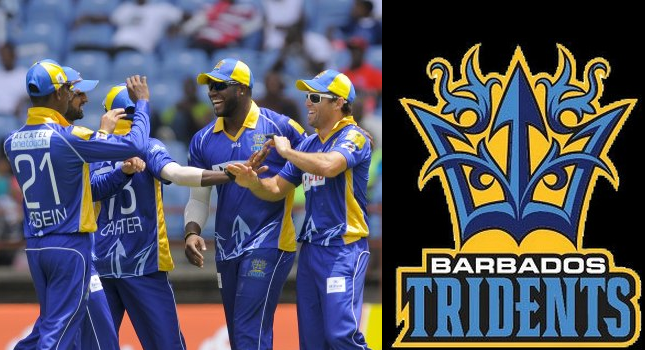 Barbados Tridents won the title of CPL 20 once in 2014. It is currently captained by Kieron Pollard who is the famous all-rounder. Hollywood actor Mark Wahlberg is the franchise owner of this team.

So, let’s take a look of the team squad of Barbados Tridents which is listed below.

Yes, Barbados has some most experienced T20 experts led by Kieron Pollard who is a performing all-rounder. He has played 43 T20 International and scored 633 run with 2 fifties and also took 19 wickets. His individual best run is 63. The franchise owner of the team has spent huge amount of money to pick some talented cricketers named the most fearsome batsman AB De Villiers who could dominate the opponent bowlers. Also they have famous all-rounder Shoaib Malik and so on. They have totally picked 5 (five) overseas players where all five can play each match in this biggest cricket T20 event. So, let’s see the possibly best eleven listed below.

Last of all, Barbados Tridents has possibly strength to win this mighty title once more and they are desperate to do it. So, they would possibly present some exciting matches in next CPL T20 2016 expected by fans and followers.