The Caribbean Premier League, simply know as CPL T20 is an annual Twenty20 cricket tournament held in the Caribbean. CPL T20 is one of the most biggest professional T20 cricket tournament which next season will start on coming July 2016 sponsored by Hero MotoCorp and is officially titled the Hero CPL. Six teams will participate in this tournament. Jamaica Tallawahs is one of them as the most successful opponent of the trophy of CPL T20. The Jamaica Tallawahs is the representative team of Jamaica in the Caribbean Premier League. Jamaica is the fifth largest island country in the Caribbean. Jamaica Tallawahs won the inaugural tournament by defeating the Guyana Amazon Warriors in the final at Queen’s Park Oval. They are known for their formidable home record, winning 5 out of their 6 home games in CPL History since the end of the 2014 season. They are also the only team in CPL history to play all 11 local players in match which they did in 2013 at home against the Trinidad and Tobago Red Steel where their all 11 Tallawah players were Jamaican. Their home ground is Sabina Park which is situated at Kingston, Jamaica. 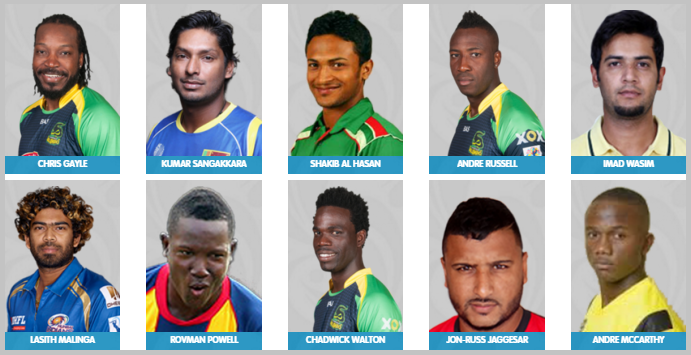 Jamaica Tallawahs is currently captained by renowned all-rounder and most tremendous batsman Chris Gayle. Manish Patel & Ron Parikh are the franchise owner of this team.

So,let’s take a look on the team squad of Jamaica Tallawahs is listed below.

Obviously, Jamaica Tallawahs has some good players captained by destroying batsman and T20 experts Chris Gayle who has played 45 T20 International and scored 1406 runs with 13 fifties and a hundred. His personal best is 117. He also has taken 15 wickets in T20 International cricket. That makes him the most fearsome all-rounder in the world nowadays. They also took world no #1 all-rounder Shakib Al Hasan, most run maker Kumar Sangakkara and fast bowler Lasith Malinga. They also have Pakistani all-rounder Imad Wasim.He has best for his left arm orthodox bowling. They are all in form now. Let’s see the possibly best eleven which is listed below.