The 6th edition of Caribbean Premier League is scheduled to be run from next 8 August to 16th September, 2018. Total six franchise teams will participate in this biggest T20 tournament just like old time. They are Trinbago Knight Riders, Barbados Tridents, St Lucia Zouks, Guyana Amazon Warriors, St Kitts and Nevis Patriots and Jamaica Tallawahs. Trinbago Knight Riders is a new franchise team which was previously known as Trinidad & Tobago Red Steel. They will start this season as a defending champion. The inaugural match of this season will be placed between Barbados Tridents and Guyana Amazon Warriors. Let’s see the point table of upcoming Caribbean Premier League (CPL) T20 2016 which is listed below. 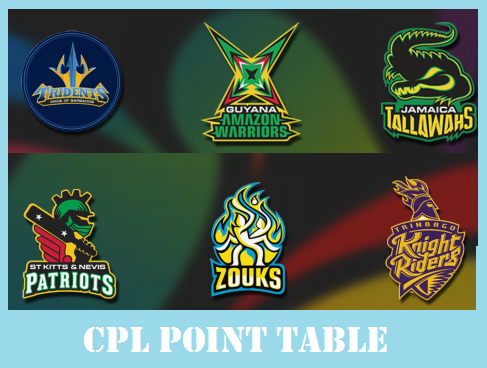 In Caribbean Premier League history, Trinbago Knight Riders is one of the most successful team which has won last CPL T20 title in 2015. This team is currently captained by Dwayne Bravo who is an all rounder. This franchise team also has picked up some tremendous players this season like fearsome Black Caps Brendon McCullum who has enough capability to destroy opponent bowling lineup, Proteases Hashim Amla, Umar Akmal from Pakistan and so on. They would dominate opponent bowlers this season. Their head coach Simon Helmot would possibly make a balance team worthy enough to claim this title again. Their team line up has made them hot favourite in CPL T20 2016. They will start this season by playing against St Lucia Zouks in the 2nd match of the tournament in 22nd June, 2016 at Darren Sammy Stadium.

On the other hand, Barbados Tridents is also another top contender of the title where they won one title of CPL T20 in 2014. In this season of CPL T20, team Barbados will have to play ten (10) group stage matches to reach semi finals. They have also some talented players like AB De Villiers, Shoaib Malik and some others. Their coach former Indian cricketer Robin Singh is very hopeful for his team. They are just another opponent to the title.

The Caribbean Premier League (CPL) T20 has become one of the most popular T20 events around the world nowadays. It is examined 4th largest domestic T20 cricket throughout the world after IPL, Big Bash and NatWest t20 Blast.

Besides, Jamaica Tallawahs and Guyana Amazon Warriors also have possibility to win this title. Here we present previous winners below.

Including Final, total thirty three (33) matches will be place in six different stadiums in Caribbean named Sabina Park, Darren Sammy Stadium, Warner Park, Providence Stadium, Kensington Oval and Queen’s Park Oval. The final match of the tournament will be held at the stadium of Queen’s Park Oval with 20,000 seat capacity.

Now, it is only a matter of time to start another prestigious T20 event in the world this season. The fans of cricket waiting eagerly to enjoy this tournament.