Caribbean Premier League or CPL T20 is an annual T20 league competition under the charges of West Indies Cricket Board. The first season of CPL T20 was held in 2013. Within very short time, it has become one of the most popular T20 cricket competition around the world. Since the inception of CPL, Hero MotoCorp is the sponsor of this largest annual event. Which why, this tournament is also called Hero CPL. 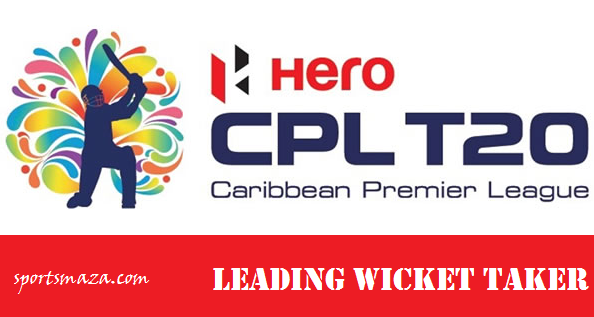 Let’s take a look below where the top ten wicket takers in Caribbean Premier League 2018 is given.

Among competing eight teams, three of them have tested the glory of winning this CPL title. Jamaica Tallawahs won the inaugural season title in 2013, 2nd title was won by Barbados Tridents in 2014 and last title was grabbed by Trinbago Knight Riders in 2015 when it was known as Trinidad and Tobago Red Steel.

Here we present below the top five (5) wicket Taking bowlers in last season in CPL T20 2015.

From Fourteen (14) cricket playing nations, around 323 players was picked up for auction which was placed in 11th February, 2016 in Barbados. Among them, thirty three (33) T20 expert cricketers are bought by six franchise teams.

Fourth season of CPL T20 will be more exciting than before which is combining of a flock of talented cricketers. Six overseas cricketers from six franchise teams are selected as an icon or marquee players which are participating in exchange for US $ 1,30,000 each. They are AB de Villiers, Kumar Sangakkara, Brendon McCullum, Shane Watson, Martin Guptill, Faf du Plessis.

It should be hard to say that who will be the most destructive bowlers in this season of CPL cause there are too many performing bowlers. All of them are selected for their extraordinary performance in cricket. Sri Lankan fast bowler Lasith Malinga is famous for his pace as well as Robin Peterson, Shoaib Malik, Shakib Al Hasan, Imad Wasim, Sohail Tanvir, Shane Watson, Tabraiz Shamsi, Thisara Perera and so on have some tremendous spell that would be dangerous for the batsman. On the other hand, some local bowlers like Dwayne Bravo, Sunil Narine, Kieron Pollard are also the top ranked bowler in CPL according to previous statistics. They would possibly be the successor in coming CPL T20 2016.

Total six franchise teams from six different cities of West Indies will participate in this biggest T20 annual event as usual. Total thirty three (33) matches including final will be placed in six (6) different venues across the Caribbean where the final match of the tournament will be placed at Providence Stadium, Providence, Guyana in 26th July, 2016 with 15,000 seat capacity.

The selected venues are listed below.