As Cricket is a game of passion and similarly motorcycle riding is also a thing of passion to many people. And when these two meets it is simply superb. Many of the modern day cricketers and also some former cricketers have passion in Motorbike riding. They have some awesome collection of motorbikes. Most cricketers of different countries go on to buy luxurious and comfortable four wheelers when they have enough money, but there are some cricketers who are passionate about motorbikes. Today we have compiled a list of cricketers who prefer motorbike over cars and they are passionate about that. 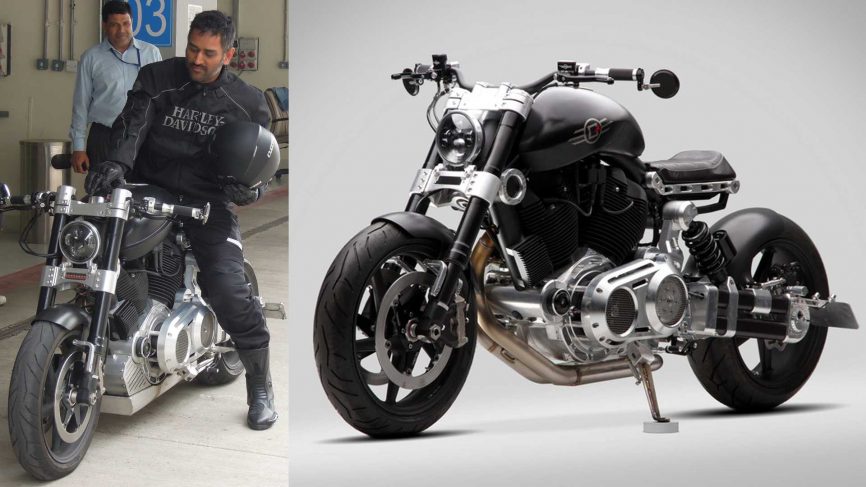 When it is about a cricketer who loves motorbikes, certainly this name will come first to a cricket fan’s mind. He is none other than former world cup winning Indian captain  Mahendra Singh Dhoni. Dhoni is known for his motorbike love since he first came into the Indian team. Dhoni passes his time with his motorbikes whenever he gets time between his very busy schedules serving Indian cricket team, may it be in his hometown Ranchi or wherever he is. Dhoni owns different powerful and luxurious motorbikes in his garage. Some names are Kawasaki Ninja ZX14-R, a Ducati 1098S, numerous Yamaha RD350s etc. he also got a custom made dirt motorbike which was specially made for him by TVS motorbike company. The latest inclusion in his list is a Confederate Hellcat X132 which is Jet black in color. In case you don’t know, Confederate motors are one of the most exclusive motorbike companies in the world, which is from Alabama, USA. They have some famous celebrities’ names in their roster like David Beckham and Brad Pitt.

Now, coming to the bike, Hellcat is a limited edition street bike which is produced by exquisite material using hand. As an example: Carbon fiber and aircraft-grade aluminium. The Hellcat uses a 2163cc V-Twin engine that has output of 132 bhp and 203 Nm of torque. It has a five speed gearbox. And also it is equipped with a powerful engine and race-specification gear box. It is not for using in local tracks but it is most suitable for cruising around the city in immense speed. 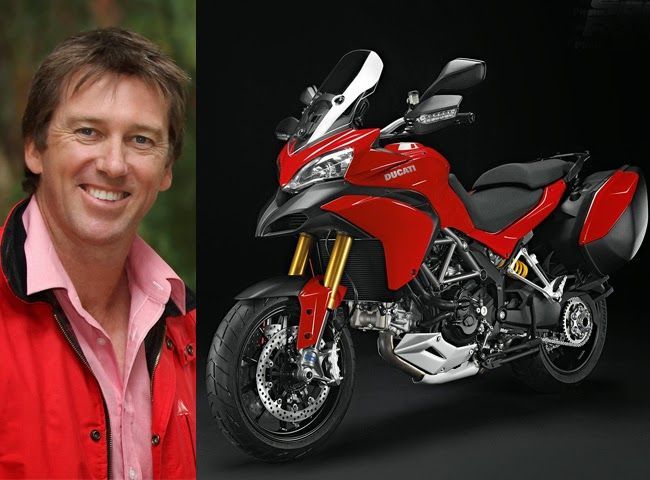 Former Australian pacer and arguably one of the greatest pacer of  test cricket who got the record of most test wickets is also passionate for motorcycles, as he got a Ducati Multistrada 1200 in his collection. He describes himself as an outdoors man who loves to enjoy his life. So, it is very natural for a guy who is passionate of bikes and also outdoorsman to buy a Ducati Multistrada 1200 motorbike.

Ducati Multistrada is powered by a 1198cc 90° V-twin engine that produces a maximum of 150 BHP and 119 Nm torque. Mutistrada is a combination of four bikes in one as it provides four modes such as urban mode for city riding, Sport mode for twisty roads, Enduro mode for the rugged terrain, and Touring mode for cruising on the highway. Throttle response, power level, anti lock braking system, suspension control and traction works vary according to those modes. So, it is one of the most suitable bikes for a outdoorsman like the former Aussie pacer Glenn McGrath. 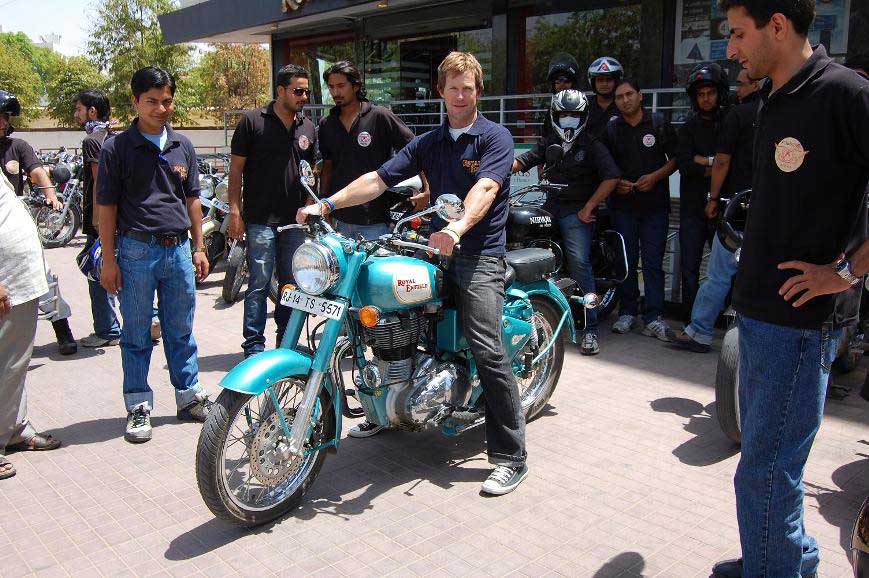 Jonty Rhodes is known as one of the most acrobatic and energetic fielder the cricket world has ever seen. According to some experts he is the best fielder of all time. So, this former South African batsman has affection towards classic and outdoor type of bikes. The classic bike Jonty owns is the Royal Enfield Classic 350.

The classic 350 is a modern edition of Royal Enfield bikes. It has single rider saddle and an oval shaped airbox cover. The 346cc single cylinder engine is perfect for cruising. The rider who rides it in off roads feels very comfortable, be it any broken or rocky roads. 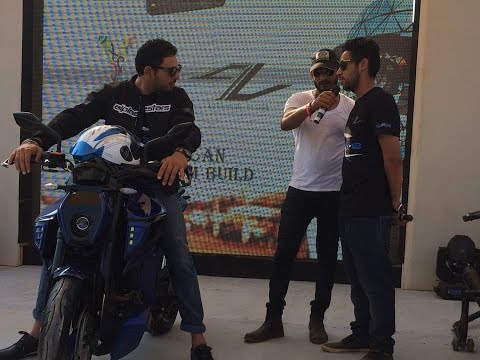 Yuvraj Singh, the stylish middle order batsman of India is very much passionate about cricket. We all know that. He made India champion of 2011 ICC World Cup being the Man of the Tournament despite having cancer. He continued playing even after knowing that he has cancer. But, many of us don’t know that he also has passion for motorbikes. Recently he has got an Autologue YouWeCan KTM X-12 custom bike (Duke 390).

Autologue YouWeCan KTM X-12 custom bike (Duke 390) bike is a custom made bike which is made by a customizer called Mukul Nanda. This bike is made from parts and systems from many other motorcycles. Such as YouWeCan KTM X12, X26 body kits, the racer kit from Royal Enfield and the off road kits from Hero Impulse. 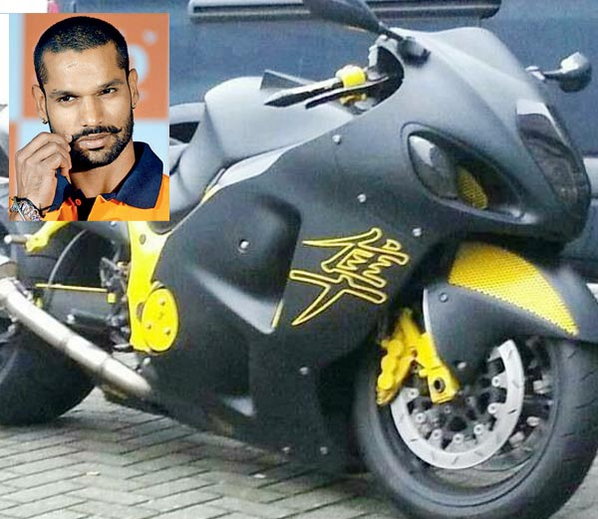 Thius swashbuckling Indian team opener is a proud owner of a Suzuki GSX 1300 Hatyabusa. Shikhar Dhawan who is a key player for the current Indian side is known for his muscular physique display, aggression like a warrior and a strong character which characteristics are very much similar to the Suzuki Hayabusa.

Suzuki Hayabusa GSX 1300R was designed as a sports tourer as it has a 1340cc engine which produces 197 BHP and offer 137 Nm torque. It was aerodynamically designed to give the lowest drag. The Hayabusa accelerates 0-100 kmph in less than 2.5 seconds. This bike is amazingly fast and strong. This bike is as fast as a Bugatti Veyron car. And it may also be steadier when it needs to be.

Besides there are some other cricketers in the world who loves to ride motorbikes and passionate about motorcycle. They are Shahid Afridi of Pakistan, Pragyan Ojha of India; Mashrafe Mortaja, Sabbir Rahman, Nasir Hossain, Taskin Ahmed of Bangladesh, Andrew Flintoff of England and many more.