England Cricket Board, simply known as ECB represents England and Wales in International cricket. England is one of the most successful cricket team in the world nowadays under the charges of England Cricket Board (ECB) which was one of the first team to play test in the cricket history against Australia in 1877. England is one of the three founder of today’s International Cricket Council (ICC), former name was Imperial Cricket Conference. England is also the first team to play One Day international (ODI) against Australia on 5th January 1971.

According to the last statistics, team England has played total 969 test matches where they won 346 of them, lost 282 and rest 341 matches were drawn. They also won the mighty Ashes 32 times. On the other hand, in ODI cricket, they have played almost 666 matches and won 321 of them. England is currently standing in 5th position in Test, 6th position in ODI and also 6th in number in T20 according to the ICC. 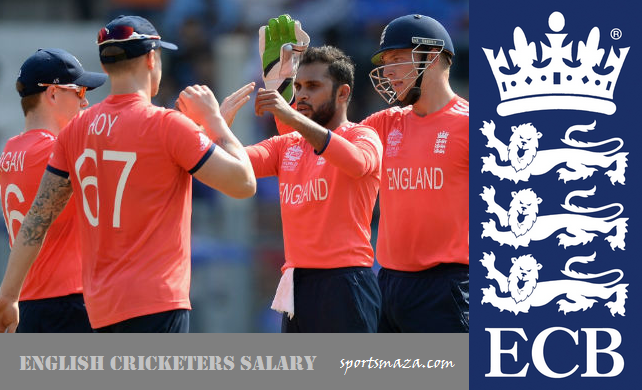 Besides, the captain of the team get extra bonus for his captaincy and they have got so many fee including match winning fee.

Total eleven players are get contracted with ECB which will be expired on next September 2016. And other eight (8) players have got increment contract. Let’s see their list with details below.

Besides this central contract and increment contract, every player can earn a large amount in various league cricket which held throughout the world like Indian Premier League, Caribbean Premier League, Pakistan Super League, Bangladesh Premier League and so on. In the 9th season of IPL 2016, total four english players have been picked up in exchange for huge amount. Sam Billings is for US $45,000 , Jos Buttler is get contracted with Mumbai Indians for US $560,000, Kevin Pietersen has been taken for US $520,000 and followed by Eoin Morgan will play for Sunrisers Hyderabad in exchange for US $220,000 for this season of IPL. Owais Shah and Azeem Rafiq are the two english cricketers who are get contracted to play in CPL for this season of 2016. They earn a lot from this different kinds of league cricket.