Eden garden was the host of this match where batsman getting extra facility to score more run. After winning into the toss, English captain Eoin Morgan elected to field first. Extra ordinary bowling by English bowlers, forced New Zealand to give early wicket and stopped them to play big shorts. Colin Munro, Kane Williamson the captain & Corey Anderson’s 46, 32 & 28 run helped black caps to collect 153 runs in total within 2o over. Though it’s seems fighting score for t20 format but English opener Jason Roy’s 78 runs on 44 bowls simply destroyed the team of Kane Williamson. Most of the specialists indicate NZ as the favourite of the tournament but Jason Roy changed everything of the event.

Details before the match –

Group 2 Champion black caps will play against English national team on ICC world twenty20 1st semifinal today. Still now the team of Kane Williamson didn’t lose any matches into this tournament and that’s why mentioning as the most favourite team to win the trophy of this year. Eoin Morgan’s English team lost in one matches only against the Caribbeans and won rest of the matches. As it’s a knockout round and do or die match, both team would fire during the match. Feroz Shah Kotla Ground of Delhi is prepared to arrange this biggest event of T20 world cup 2016. 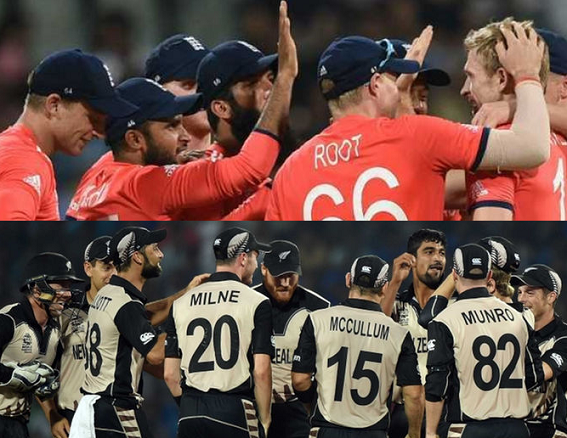 Match between: England Vs New Zealand

To see the live scorecard, audiences should visit cricinfo to get update. If want to watch live this match direct in online TV, please check our right side bar to find desired link.

Most strong issue for the black caps is their qualify spin attack. Young talent Ish Sodhi & Mitchell Santner bowling extremely well and batsman facing problem from the beginning of the tournament. This is why India, Australia, Bangladesh & Pakistan lost against this team in group round. Usually, English team play in big matches it’s true. England should play best cricket in twenty20 format as they play Natwest and couple of popular t20 league in their nation regularly which made them professional.

Prediction: New Zealand is the possible winner of this match

As still now this two teams played 12 twenty20 matches in total where English team won in 8. England won a T20 world cup as well and that’s why we should keep ahead this team of Great Britain but this tournament performance on the basis of South Asian environment, need to give favoure to the black caps surely. They started this tournament by a big surprise by won over host nation India.