Cricket call the sport of gentleman but sometimes excitement, technique & lack of passion influence players to turned them into physical fight. Though sledging is a common fact for a bowler to anger the batsman to hit hard and play bad shots. Batsman shouldn’t take it seriously and loss his passion as well. Beside sledges by the bowlers, wicket keeper is always throw speech to the batsman usually to break his concentration & passion. Wicket saving pressure and this kind of unusual taking, sometimes force the batsman to open his mouth and then it become goes to fight between 2 players even between the both team. Though this not part of cricket but audience enjoy this situation as well. Still now there is no big mayhem happen in cricket history as like other sports but this kind of co-incidence entertain the fans so much.

Australian biggest twenty20 county league frenches always hire West Indies cricketers cause of their professionalism performance in 20 over limited matches. As Marlon Samuels is a all-rounder performer, he get call to play for different clubs. In the season of 2014-15, Samuels played for Melbourne Renegades. The match was against Shane Warne’s Melbourne stars. In the first innings of the match, Michael Hussey was facing the bowl of Marlon Samuels. After take a single run, tried to come back again for the 2nd run but the bowler Samuels tried to stop him by his hand. This time Hussey become angry and give the complain to the umpire. Game started when Samuels came for bat. Shane Warne was in bowling attack and didn’t forget the attitude of him. Just after finishing of his over, throw few insulting speech to him which bound Samuels to become angry. Umpire handle the situation again. Into the next over of Warne, Hussey was a fielder in short and after taking the bowl, throw it to Samuels technically as he threw it to the stump. This time the Caribbean man throw his bat and start to quarrel. Finch was the partner of Samuels in that time who tried to tackle the situation as well. 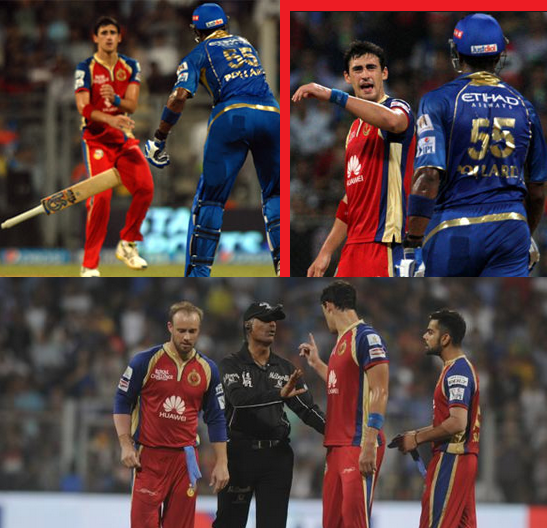 Big fight between two hot twenty20 cricketer. Caribbean hard hitter batsman became so angry for the attitude and sledging of Australian in form fast bowler Mitchell Starc. It was a match of 2014 Indian Premier League where Pollard was batting for Mumbai Indians and Starc bowling for RCB. As usual attitude of a fast bowler Starc tell something to Pollard and the West Indies man simply insult him by griffin which may made anger to the bowler. In the next bowl, Kieron leave the pitch as he was not ready to face the bowl but Stark throw the bowl to his leg which was break the passion of this Caribbean cricketer and throw his bat in the field. Umpire and RCB cricketer Chris Gayle came in to advise Pollard to keep passion. But rest of the RCB players complain to the umpire about the attitude of Pollard and give support their bowler Michell Starc. 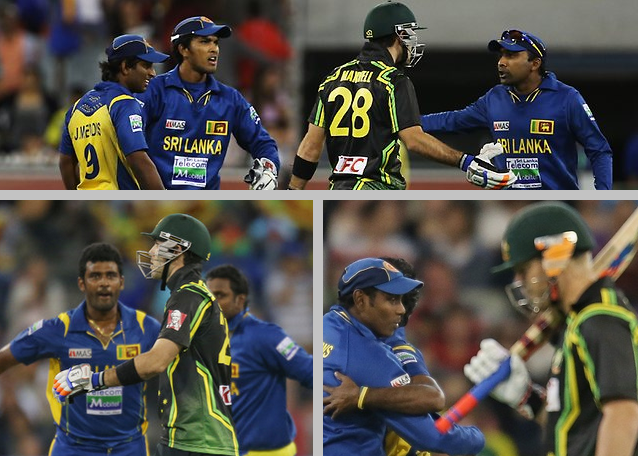 It was a 20-20 match between Sri Lanka and Australia. Sri Lanka scored 121 in first innings. Though 122 was not a big target but Australia can’t able to score this total and lost by 2 runs. In last 3 ball, Aussies need to collect 12 runs to win. Thisara Perera was the bowler and Glenn Maxwell was facing him. Scored 2 boundary (4) in first 2 bowls. Into the last bowl, Australian needed 4 runs. It was a very tough situation for the both team. All Lankan senior cricketers including Lasith Malinga, Angelo Mathews, Mahela Jaywardene came to Perera to advise and taking little bit more time which would be a technique for them to change the concentration of Maxwell. That’s why Max was fired and tell something to them. But every Lankan cricketers protest him and looks like they are quarreling. Thisara Perera successfully make a dot bowl and ensure win for Sri Lanka. But Maxwell and Warner become so angry and feeling worse to hand shake with the opponent players. 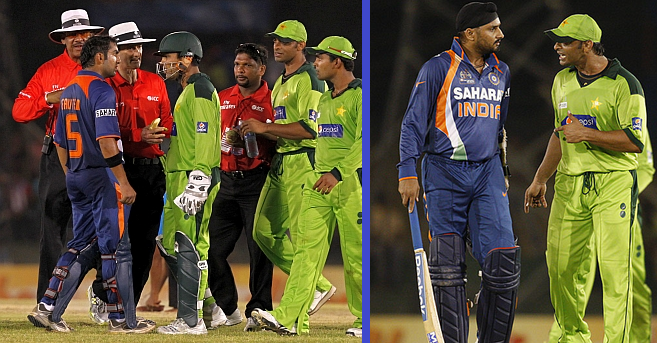 India – Pakistan match means extra excitement, extra entertainment as they are the biggest opponent in cricket world. It was 2010 Asia cup match where Pakistan give 268 target to India. Gautam Gambhir was in form batsman and he was the hero to win this game. Shahid Afridi & Shahed Azmal bowled well and defeated Gambhir again and again. Wicket keeper Kamran Akmal appeal for the wicket more and more times which annoyed this Indian batsman so much and this situation made a controversy between them. MS Dhoni was the partner of Gambhir who tried to tackle the situation by consolation to Gambhir. This wasn’t finish of the fight. Into the finishing moment of the match Harbhajan Singh came for bat and facing Rawalpindi express. Shoaib Akhter tried to anger him by sledging which was an amazing situation to watch.

In India tour of Australia test series, Virat Kohli facing Mitchell Johnson. After taking the ball, Mitchell Johnson throw it directly to the stump, Kohli was in front of it and the ball stick his leg. Though Virat withing his place but Johnson may be intentionally hit him. After facing the bowl and when going for run, started to throw speed to each other. 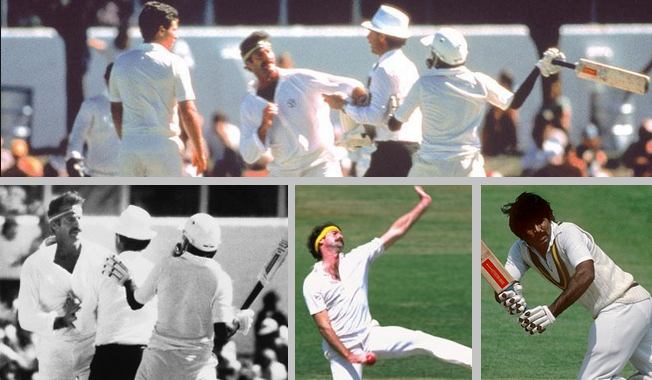 Both are the living legend of cricket. Javed Miandad scored huge run in his career for Pakistan National team and Dennis Lillee was the most fastest bowler of their time being. Australia was a very renowned team in that time as well. Pakistan is just growing up them in that years. Javed Miandad took a single in Lillee’s bowl and came in bowlers side. Dennis Lillee sledges him and kick on his leg. Javed Miandad also raised his bat to beat him. This is the most historic fight of cricket history.