Indian Premier League or simply IPL is the most popular T20 cricket event throughout the world nowadays which is reviewed the topest and most challenging T20 tournament. Like every years since the inaugural season of IPL in 2007, this year ninth version of IPL will held again in next 9th April 2016 to 29th May, 2016. So, the opening ceremony of IPL 2016 will be executed in 8th April, 2016 at the Wankhede Stadium, Mumbai. Let’s take a look below where the schedule and short details of IPL opening ceremony is given.

Yo Yo Honey Singh Performance 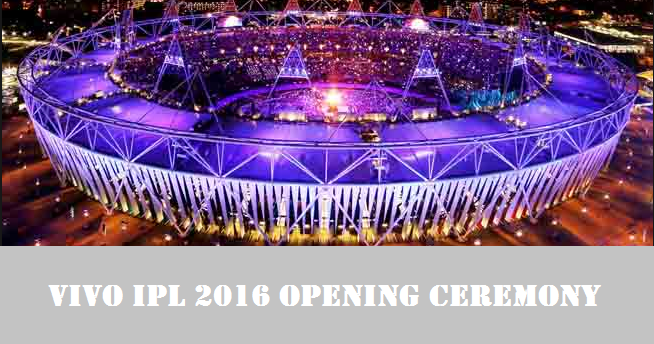 Like previous years, this time some Bollywood celebrities will participate in the grand opening of IPL 2016 named Ranveer Singh, Katrina Kaif, Jacqueline Fernandez and famous singer Yo Yo Honey Singh.  And obviously two American Singer Major Lazer and Chris Brown will inebriate the stage of IPL ceremony this time. Bollywood superstar Ranveer Singh is willing to dedicate his performance to all fans of cricket around the world. Performers short details are given below.

# Yo Yo Honey Singh: 33 years old and born in Hoshiarpur, Punjab, India, Hirdesh Singh is known as Honey Singh or Yo Yo Honey Singh is Rapper, Actor, Music Producer and a singer. He is one of the highest paid music producer in Bollywood. He has received so many awards along with The ETC and The PTC. He is going to perform in ninth edition of IPL opening ceremony in next 8th April, 2016.

# Major Lazer: Origin of Los Angeles, California, United States, Major Lazer is an electronic music group established by Switch and Diplo. They have released three full albums in 2009, 2013 and 2015 named Guns Don’t Kill People… Lazers Do, Free the Universe and Peace Is the Mission. They are invited to take part in the opening ceremony of IPL 2016 as well.

# Chris Brown: Christopher Maurice Brown or simply Chris Brown is a famous American singer born in Tappahannock, Virginia, United States. He is also an actor, songwriter and dancer. 26 years old Chris Brown is a talented performer since he was 13. He will go to perform in coming IPL 2016 opening ceremony.

# Ranveer Singh: Ranveer Singh Bhavnani or Ranveer Singh is a popular Bollywood actor who is Indian origin by born in Mumbai, Maharashtra, India. He is an actor since 2010. 30 years old, Ranveer Singh is a successful actor in Bollywood by acting in every direction like a comedian, romantic hero, action, drama and son on. He has become star by acting in a movie named Lootera in 2013. And next Goliyon Ki Raasleela Ram Leela, Gunday, Dil Dhadakne Do all movies have become superhit acting by him. He is also a good stage performer who is called for Indian Premier League starting ceremony in next 8th April, 2016.

# Katrina Kaif: By British birth Katrina Kaif is a model and film actress in Bollywood and one of the most highest paid actress nowadays. She is also examined one of the most attractive celebrities in India by media. She has acted in many Bollywood movies and some of them are most popular like Dhoom 3, Ajab Prem Ki Ghazab Kahani, Ek Tha Tiger and so on. She is also invited to participate in this program.

It will the first time for Chris Brown to visit India. So, he he is very excited to perform here and obviously looking forward to meet the peoples of India.

The VIVO IPL 9 is going to reveal two new participants named Rising Pune Supergiants (RPS) and Gujarat Lions (GL) instead of Rajasthan Royals (RR) and Chennai Super Kings (CSK). The first match of IPL in this season will be held between defending champion Mumbai Indians and one of the new teams Rising Pune Supergiants in 9th April, 2016.