PSL (Pakistan Super league) inauguration edition knocking at the door. The tournament going to be started from upcoming 4th February and the final round will be executed on 24th February. Islamabad United is one of the participants team of PSL T20. The franchise is represented the Islamabad city. The players draft was held on 22nd December of last year. Pakistan Super League head  Najam Sethi has announced the squad officially. Not only the squad, he also proclaimed the team logo, jersey. Leonine Global Sports Ltd. becomes the owner of the team. The franchise was sold for 1.5 million US$. 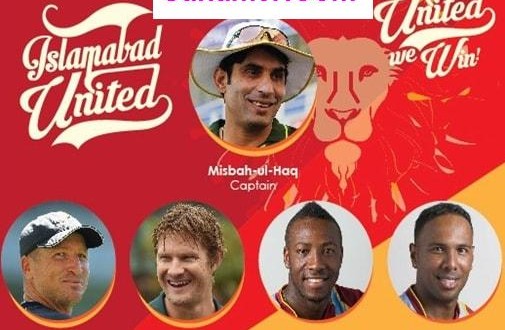 The most experience Pakistani national team cricketer Misbah-ul-Haq become the captain of the team. This middle order batsman made 5122 run score in his 162 ODI matches. He also played 39 International Twenty20 and 129 domestic T20s, where he achieved 788 and 2901 scores respectively.

Apart of him the squad holding some powerful players like Sharjeel Khan, Khalid Latif, Mohammad Sami, Mohammad Irfan and some others. The overseas Andre Russell, Shane Watson, Brad Haddin,Sam Billings, and Samuel Badree also included in the team. There also present some supplementary players in the squad. They will participate in the game where they needed.

Owner name: Leonine Global Sports Ltd. is the owner of the franchises of Islamabad United. They bought the team for 1.5 million US dollars.

Assistant Coach: Tauseef Ahmed from Pakistan becomes the Assistant coach of the team.

Ambassadors: Singer, Actor and model Ali Zafar and and Fawad Khan becomes the brand Ambassadors of the team.

This is the Islamabad United team squad. All the players of the team is well experience and t20 expert. The team coach is very hopeful for the squad. So guys get your belt tight for watching the PSL inauguration season and linked with us for more update.