Lahore Qalandars is a professional T20 cricket team established by Pakistan Cricket Board (PCB) which competes in the Pakistan Super League (PSL) in next 5th February 2016 against Karachi Kings at Dubai International Cricket Stadium of their first match in this tournament. In Punjab province, Lahore is a capital city and second largest metropolitan area in Pakistan. Let’s see what does QALANDARS stands for. Qalandar is an honorific title which was given to a saint. They are different from the other saint. They have very strong feeling about God’s creation. They are those person who enjoys freedom from ties. Qalandars spread the message of love and humanity. The franchise owner of this team Fawad Rana revealed this name and said that this was chosen to highlight Sufi culture of Lahore. Fawad Rana’s QALCO (Qatar Lubricants Company) owned this team in exchange for 24 million USD. The Lahore Qalandars squad is the second most expensive team in Pakistan Super League after Karachi Kings. 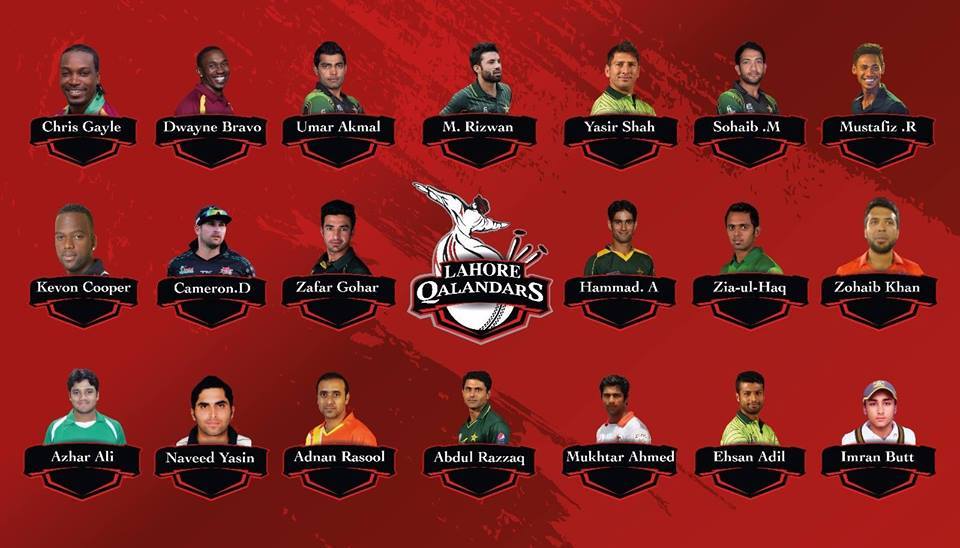 The team squad of Lahore Qalandars is listed below.

Yes obviously, Lahore Qalandars have some good cricketers. Azhar Ali, Mukhtar Ahmed, Sohaib Maqsood are all good performing batsman. They did well enough according to their previous statistics. Umar Akmal is also a destroying batsman. On the other hand they have five overseas players named cutter master Mustafizur Rahman who has some fearsome bowling spell that could be tremendous for the opponent. They also have a horrible batsman like Chris Gayle who is a big shot. In his day he would be one enough to win any match. They have experienced all-rounder named Abdul Razzaq and googly bowler Yasir Shah too. They should be in the best XI. Let’s see the possibly best eleven listed below.

Reviewing the team squad of Lahore Qalandars, they have possibly strength to win this title for the first time. So, time will say what will happen next. Let’s wait and watch.