Per winner team will get 2 points for each game and the loser team will not derive any point. In case of abandon match the winning point will be divided into two portion, where the both team will obtain 1 points. Here we have apprised NatWest T20, 2016 point table in below. 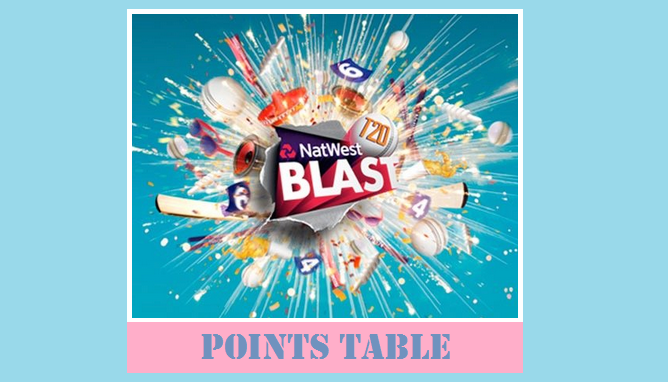 The NatWest T20 Blast refers a short format of cricket tournament, which take place in England in every calendar of year. The event has been established under the administration of England Cricket Board in 2014. The tournament  has been consisted 18 leading domestic franchises which are allocated into two side North and South. The each side bears nine participants where they have to play six matches against others.

It going to be the third edition of NatWest t20 Blast which schedule confirmed from 20th May to 22nd August, 2016. The total 18 teams from both group North and South have to play 130 matches in first stage and the top four franchises will qualify for the knockout round. The Semi-final and final round will be captivated at Edgbaston, Birmingham.

If we talk about the last year point table we find the Birmingham Bears name, who was the top most point holder with 20 points. This North Division team had won 10 matches out of 14. Not only point table, the team also the debut season champion of NatWest T20. The defending champion, Lancashire Lightning became the fourth point holder of the event with 15. Worcestershire Rapids and Northamptonshire Steelbacks  being the second and third position holder respectively.

Actually the point table refers the team’s performances by a flow chart. It consists a short format of information but conveys overall story of the respective franchises and also the tournament.

The tournament opening match will be played by Durham Vs Worcestershire at New Road, Worcester on 20th August. On the same day there are total six matches will be taken place, which are hosted in different venue.

The defending champion Lancashire will be faced Derbyshire on tournament second day at Emirates Old Trafford, Manchester. This season the franchise more confident than ever. Like Luis Reece, Martin Guptill, Tom Bailey, Tom Smith, James Anderson has been consisted on the team.

Northamptonshire whose state was in third position of last year point table, has the chance to prove themselves once again. The franchises also included some diplomatic player like David Willey, Steven Crook, Graeme White on the squad.

However, this season the all contestant team seems more confident and determined as the were in past. So it is quite difficult to predict one’s favor. So, guys let’s wait and watch what happen and who will be the next title holder of the tournament.