Cricket is depends on both Batting and bowling performance. In one side the batsman try to rich the run score and the other side bowler try to control the run score. Besides the batsman bowlers are also played important role for winning the match. The most balancing and most wicket taker cricketers are Muralitharan, Wasim Akram, Waqar Younis, WPUJC Vaas, Shahid Afridi, SM Pollock, GD McGrath, Brett Lee, Anil kumble, Jayasuriya. Now we present these legend players extra ordinary records.

When we talking about the best wicket we found the 1st name M. Muralitharan. He was the brilliant bowler all ever. He played total 350 ODI matches and took 534 wickets on his carrier. His best bowling score is 7-30 and he got this outstanding record against India in 2000. 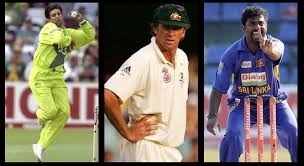 Pakistan’s bowling power was always strong. Wasim Akram is the greatest legend of Pakistan who took 502 wickets on 356 matches. His best wicket score is 5-15. He was the brilliant player who got the both record in batting and bowling.

When we talking about Pakistan bowling power how can we forget the greatest name of Waqar Younis . He played 262 ODI matches and gathered total 12698 runs in his life time ODI carrier. He took total 416 wickets in his ODI Carrier and his best bowling score is 7-36.

After M. Muralitharan Vaas is the 2nd bowler of Sri Lanka who took 400 wickets in ODI matches. This outstanding bowler played 322 ODI matches in his carrier. His best bowling score is 8-19 and he achieved this brilliant score against Zimbabwe in his 38 ODI innings.

The all rounder Boom Boom Afridi proved himself as a better bowler than batsman. In 1996 as a spinner he started his ODI carrier at the age of 16 . this great legend played total 398 ODI matches in his carrier and took 395 wickets. His best bowling score is 7-12.

Shaun Pollock was not only fast-medium seam bowler but also a very hard hitting player. In his 303 ODI matches he achieved total 393 wickets. He was the 1st South African Bowler who got the huge number of wickets. His best bowling score is 6-30.

Brett Lee was the 1st Australian bowler who got 380 wickets in ODI matches. This fast bowler rank was like Shoaib Akhtar. He played total 221 ODI matches on his carrier. His best bowling score is 5-22.

Anil kumble was a former captain of India and 1993 he was selected as Cricketer of the year. This great bowler played 271 ODI matches on his carrier and took 337 wickets total. He achieved the great score six wickets for 12 run against West Indies.

Jayasuriya is the only all rounder player who achieved more 12000 runs and 300 wickets in ODI matches. In his whole ODI carrier he played 445 matches and took 322 wickets. His best bowling score is 6 wickets for 29 runs.