The Caribbean Premier League, simply know as CPL 20 is an annual Twenty20 cricket tournament held in the Caribbean. CPL 20 is one of the most biggest professional T20 cricket tournament which next season will start on coming July 2016 sponsored by Hero MotoCorp and is officially titled the Hero CPL. Six teams will participate in this tournament. Trinbago Knight Riders is one of them as the most successful participant which was previously known as Trinidad and Tobago Red Steel. They are also the defending champion. Trinbago Knight Riders is a franchise cricket team based on Port of Spain, TKR of the Caribbean Premier League which is captained by Dwayne Bravo. Shah Rukh Khan, (Red Chillies Entertainment) and Juhi Chawla, Jay Mehta (Mehta Group) are the franchise owner of this team. They have spent a lot to pick some good T20 experts like the most tremendous batsman named Brendon Mccullum, Hashim Amla, Umar Akmal and so on. 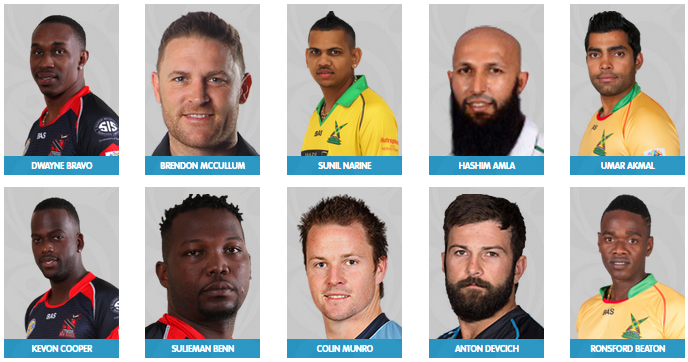 Mr. Shah Rukh Khan, Co-owner of Trinbago Knight Riders, said: “It is a great honour to become part of the rich cricketing tradition of Trinidad & Tobago. We will do everything to uphold the tradition and thank all the people of Trinbago in advance for their passion and support.”

So, let’s take a look of the team squad of Trinbago Knight Riders which is listed below.

Obviously, Trinbago Knight Riders have picked some most talented T20 experts named McCullum, Hashim Amla, Umar Akmal, Colin Munro and so on. They are the destroying batsman who could dominate the opponent bowlers. Dwayne Bravo is appointed as the captain of this team who has played totally 55 T20 International, scores 991 runs with 3 fifty (50) and also gained 40 wickets. He is a perfect captain who passes his best time now and he would be the most possible successor in this biggest event. They have picked six overseas cricketers. Among them, five can participate in each match. Here we present possible best eleven listed below.