Antonio Rudiger the Germany international has recently talked with popular sports website Sky Sports. There he opened up about his various thoughts. The Chelsea center back selected the 11 toughest players of different positions he have faced in his career. Take a look at the 27 years old’s toughest Xi :

Manuel Neuer : The center half starts with his fellow German team mate Neuer. He has picked the German number one goalie as his man between the sticks. Neuer was the man who played a crucial role in Germany’s 2014 FIFA World Cup glory. 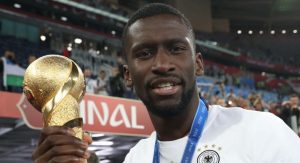 Aaron Wan Bissaka : Rudiger selects young defender Wan Bissaka at the right side of the defence. The Man Utd full back joined the Red Devils last season from Newcastle Utd. He is one of the best right backs in the English top flight. His superb skill of tackling helped him getting a place in this squad.

Sergio Ramos : The Spain national football team and Real Madrid captain is one of the two chosen center backs in this squad. Actually, he is famous for his consistency at the heart of the defence.

Virgil Van Dijk : Quite an auto choice as the Dutch man is probably the best defender in the world at this moment. The Liverpool star was in the 2nd place in the Ballon d’Or list last season.

Andrew Robertson : Another Liverpool guy in the list. The Scottish full back got the place in the left part of Rudiger’s defence.

N’Golo Kante : Rudiger places the French man in the heart of his midfield. Kante is such a humble guy and one of the bests of his position.

Kevin De Bruyne : One of those inevitable picks. The Belgian has a huge reputation in the football world. Like most of the others, Rudiger also couldn’t stop himself from keeping the double footed midfield magician out of this side.

Andres Ineista : Rudiger chooses the legendary Spaniard for the left part of his midfield. However, the 27 years old specially appreciated about the former Barca super star’s vision.

Leo Messi : The Argentine sensation will certainly make into anyone’s toughest xi for sure. Rudiger also couldn’t be exceptional in this case.

Cristiano Ronaldo : Just like Leo Messi, the Portuguese too have to be in any one’s dream xi for sure. So he was another auto choice for Rudiger.

Sergio Aguero : Finally, the list completes with the name of this Man City striker. The prolific number nine will partner Messi and Ronaldo at the front and the combination makes Rudiger’s side much more deadly.