Although there is no continuation of football matches all across the Europe, the European giants are preparing themselves for the upcoming summer transfer window. Like all other EPL giants, Arsenal are also considering the players they want to bring in to the Emirates Stadium. Let’s take a look at their wanted list :

Umtiti : Spanish La Liga champions FC Barcelona are willing to offload Samuel Umtiti. The Catalans have placed the French center back into the transfer list. They will receive offers for the World Cup winner with France. The Blaugranas will demand around 46 million GBP for the 26 years old defender. According to reports, Arsenal as well as Chelsea do have very much interest in signing Umtiti. Man Utd are also monitoring him. The former UCL champions are expecting the English giants to bid in excess of 26 million GBP. 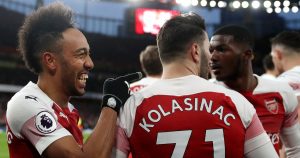 Carlos Soler : Arsenal boss Mikel Arteta is a huge fan of the Valencia CF midfielder. Thus the Gunners are monitoring him. Daily Mail revealed that, the Spanish side wants at least 36 million GBP if they do have to sell the midfield star. But the North London based side are not willing to pay that much amount for Soler, suggets Daily Express.

Marc Roca : Another La Liga midfielder is on the Gunners’ radar. Reports indicating that, the Invincibles have already opened negotiations for the midfielder with Catalonia based side RCD Espanyol.

Willian : After a long time spending at the Stamford Bridge, Brazilian star Willian is all set to leave Chelsea. The Winger’s contract with the Blues is running out and he revealed that he wants to stay the England even if he leaves the Stamford Bridge. So many other English clubs have targeted the forward. Arsenal is also monitoring the Latin American and will be keen to bring him in from their neighbour club.

Dejan Lovren : The Croatian defender’s time at the Anfield is coming to an end. He only has one year remaining of his contract with the All Reds. They will face competition from their league rivals Tottenham Hotspur and West Ham United to sign the experienced center half.

Luka Jovic : Aresnal are also considering a move for the Serbian forward Luka Jovic. The Serbian broke the system recently in Madrid and the Spanish giants are set to cut him loose.