Football Club Barcelona, simply known as FC Barcelona is a professional football club in Spain. On the other hand, Arsenal known as Arsenal FC is English professional soccer club based in London. Those are standing in the 3rd position of English Premier League point table, Arsenal will face the spanish giant and defending champion Barcelona in next 23th February 2016 on their first leg named round of last sixteen in Champions League. We know that, FC Barcelona is now the strongest club in the world which is standing in the top of Spanish La Liga and the defending champion of Copa Del Rey, Champions League, La Liga etc as well those has the most skilled forwards like Messi, Neymar, Suarez, those are the best footballer of this time being. It will be a tough job to stop them in field even for Arsenal team. 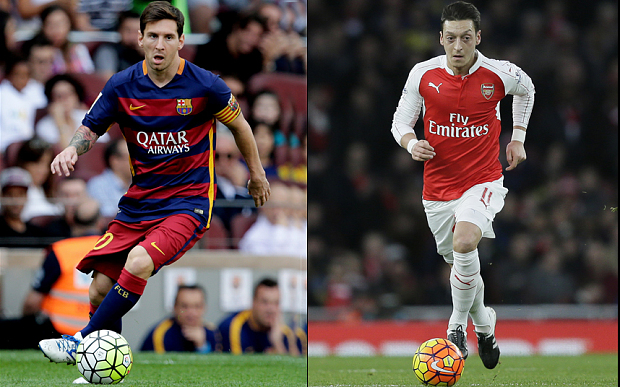 According to the opinion of football geniuses, this two match will be high voltage and competitive. So that, most of the football fans are looking forward to these game.

Yes obviously the statistic says that Barca has more opportunity to win these matches according to their previous result but it is not definite. Arsenal also has possibly strength to win for their fast attack. However, the current performance of FC Barcelona is best in the world now a days. They play with style, with speed. No doubt about the ability of Giroud, Sanchez, Walcott, Campbell like world top class players in Arsenal but it is still a questionable matter that they can able to play how much good football against the spanish giant Barca.

According to the demography between Arsenal Vs Barcelona’s last match in 2010-11 season of Champions League where they won 1 match each but Barcelona were qualified by 4 – 3 aggregation. This could be happen again in next two legs.

Moreover, last 24 January 2016 against Chelsea, Arsenal lost by 0-1 goal. But they had to win. They still had good players like Sanchez, Ozil etc but lack of confident they lost the game and they could not afford their best. So, if in front of Chelsea they did not play well enough to win which club standing 13th position in English Premier League, then what will happen in front of Luis Enrique’s team world no #1 Barcelona, It is really a thinkable matter now.

According to the performance between Arsenal Vs Barcelona, Barcelona is hot favourite for their attacking style. Messi, Suarez and Neymar are enough to destroy any kinds of defense of the opponent team. So, it will be an extra advantage for them to win. May be it is only a matter of time that Barcelona will win both two legs and select for the next round.