Barcelona is one of the richest club of Spain and they are now playing in Spanish La Liga. This times most popular and super star top three player of their position Lionel Messi, Neymar and Luis Suareaz is playing in this club and Barcelona is not think to sale them next season declared Barcelona management. 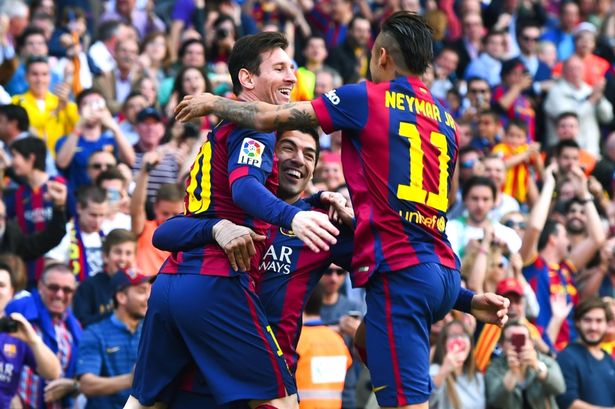 The Barcelona based sports news paper daily Sports featured Barcelona will not sale Messi, Neymar and Suareaz in the next transfer session, they shortly known as MSN. They also published their dealing money in the front page.

Barcelona was bought them, Messi for €250m, Suareaz for €200m and Neymar for €190m and they also lead Barcelona’s front side. They are the best three attacker in world football and also their combination makes hopeful to Barcelona. Their chemistry is good and they also help each other in every match.

The three big budgeted player Messi, Neymar and Suarez’s wages, bill and Barcelona’s no new deal with sponsor and a crippling players bonus system- mean the like Manchester United, Manchester City, PSG are sniffing around the Barcelona best three.

The big three of Barcelona Messi, Neymar and Suarez already shown some amazing performance in their club and they have afford to give good effort to Barcelona. The Barcelona boss said they will play continuously in Barcelona and we are not thinking to sale them very soon.