Futball Club Bayern Munchen is a German professional football sporting club which is known by worldwide as FC Bayern Munich or Bayern Munich of simply FCB. It is one of the most popular club throughout the world for it’s brilliant performance in world 2nd largest league named Bundesliga which is a Germany based league. The Reds are the most successful club in Germany having won 24 titles of Bundesliga with 17 National Cups. 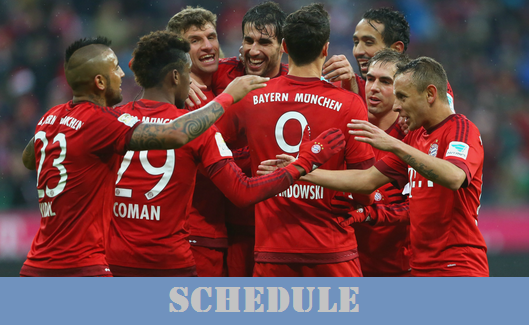 The season of Bundesliga runs from August to May in every year since the inaugural season and most of the matches used to placed in Saturdays and Sundays. Whereas the season of 2015/16 is going to finish in next May, 2016 so, team FCB will have to take enough preparation to compete in next season. As a part of their preparation, they are scheduled to play three pre season tour matches as usual in North America. These matches will be held against Milan, Inter Milan and Real Madrid. The pre season tour matches of FC Bayern is listed below.

As stated by the last head to head statistics of the team FCB against Real Madrid, they faced 17 times where the Reds won 9 times, lost 7 and rest 1 was drawn. Against Inter Milan, they played 7 times where each team won 3 times and rest 1 was drawn. And against Italian Milan, The FCB faced 9 times where they won 2, lost 4 and drawn 3 matches. So, there is no such opportunity for the Star of the South to take this pre season tour matches so lightly.

# Short Profile of The Reds:

The pre tour matches of The Bavarians 2016/17 season are the part of International Champions Cup 2016 under the charges of friendly association football. Total seventeen (17) teams from two (2) confederations will participate here. Team FCB is one of the most renowned team among them.