The Corona virus outbreak has caused suspension of the football leagues across the Europe. Like every other top leagues in the continent. the German Bundesliga has also been stopped. The campaign has been on hold since March 13 and won’t start till at least 30th April. The team training are also off as well due to the very same reason. German Football League recommended the clubs to not to return to the training until at least 5th April. As the deadline crosses, the Bavarians have decided to get back to the practice sessions.

However, the table toppers have taken a great initiative to stop the further spreading of the pandemic. They have arranged the team training in “small group”. Yes, in stead of the gathering of the full team at a place, they have decided to make groups between the players. Thus now the rosters can practice keeping things safer. The Reds will get back to the work on Monday. Bayern Munich have ensured it through a statement. 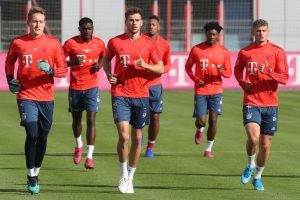 The statement revealed that, the FC Bayern Munich first team will return to training in small groups from Monday, 6 April. The program will happen in coordination with government policy and the relevant authorities. It has also confirmed that, they will strictly observe all hygiene regulations. No members of the public will be allowed to be present during the training. The club ask the fans to continue to follow the instructions of the authorities in order to further slow the spread of the corona virus. The club authority have requested the fans to not to come into the training ground during this critical situation. Whatever, the league clubs participated in a meeting on the last Tuesday and have agreed to suspend the league at least till the 30th April.

The Allianz Arena based side made an ordinary start to the season. But they have been unstoppable since the beginning of the new year. They Bavarians are yet to lose a game in 2020. They have taken part in 11 Bundesliga games since the starting of the January and won 10 of them. Their only draw came against RB Leipzig as the early February fixture ended in a goal less draw at the Munich Stadium. The most successful club in the German football history has gathered 55 points so far from their first 25 league fixtures. Hans-Dieter Flick’s side is sitting firmly on the top and are 4 points ahead than their nearest rival Borussia Dortmund.