Brighton and Hove Albion being a Premier League based club which represented on the south-coast of England. The Seagulls finished their last season in 15th position and the manager Chris Hughton wants to make something big this season and kept eyes on youngstar footballers to hire. But how much Brighton paying salary for the players right now? And how much they are earning in total? What about the total worth of this club? This feature would cover this issues and will discuss the opportunity of seagulls in near future. 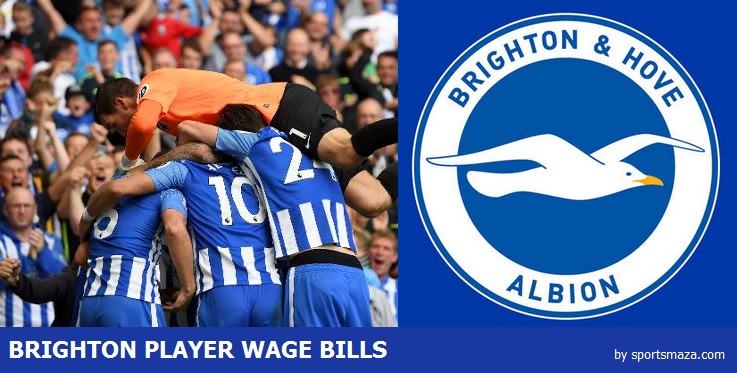 In 2018, The Seagulls made many interesting signings in the premier league history. They have appointed centre-midfielder Davy Propper who come from PSV Eindhoven club and the transfer clause of the guy being £11.7million. Valencia CF goalkeeper Matthew Ryan transfer clause is £5.4million, where Markus Suttner deal completed with £4.05 million.

Jamie Murphy have signed a 4 year contract for £4,160,000 transfer fee. The base salary of the guy fixed £1,040,000. The United Kingdom guy earn a lucrative offer form the Brighton club so far.

Florin Andone Romania players signed a 5 year contract with The Seagulls. His transfer deal completed for £5,250,000. The annual salary yet to be revealed with his weekly wages.
Brighton and Hove Albion’s 2018 Summer Signings:

Let’s see who being the highest paid Brighton and Hove Albion Player of the season. This season they have completed some big signing. All of these Jose Izquierdo embarked as the highest paid roster of the club. This Colombian forward weekly wages is about £45,000. This weekly wages made the annual salary of £2,340,000. He will be contracted with the side till June 2021.

Davy Propper is another highest paid roster of the side. He is paying as much as the Izquierdo paid. The annual salary fo the two guys are same and their contract will expire in the same time.

The second most paying player of the club earn £35,000 on a week. There set 3 players who earn the same wages on a week. One is English defender Lewis Dunk, second is French forward Anthony Knockaert and the last one is Matthew Ryan. The real will be expired on june 2022.

Valencia released him for $9 million to the Seagulls, were United Kingdom sources suggested them to make the deal of $12 million. At Present the guy busy in World Cup with his team Australia. Once the event close he will back to the club.

The head Coach Chris Hughton finalized the guy to see his impressive performance. Actually the guy join at the place of David Stockdale. The 31 years old demanding $90,000 as a week earns. But the coach denied to accept his demand and the guy left the club so far.

A total 7 players have left the place along with Stockdale. Nine players from the Seasal under-23 squad existed in the 2018/19 squad. Will Collar, Archie Davies, Ben Barclay, Danny Mandroiu, Max Sanders and Owen Moore are extended their veteran contract.

The upcoming season also come with a great enjoyment. Where the side release many old players, there they bagged some new. Some of them will send on loan. There have some more guys who is very close to end his old contract and they have not get new offer to extend their offer. As well as Jonah Ayunga, Tyler Forbes, Dessie Hutchinson, Reece, Rian O’Sullivan all going to end their club journey this season.

They think thins being the part of the worth season. To take the decision is not easy but they have to take the tough decision for the club.Actually their intention is not hurt the players, they trying to gear up the club to the upcoming season. And the club budget force him to take such of decision.

With this decision the roster also benefit as they going to start their career new chapter. They will go other stage where they will blast themselves. They have nothing to worry to their future. Hopefully a shinning future waiting for them.

The Seagull club have great source from live coverage to earn money. Every year they hugged a lot of money from different Tv coverage. Sky’s the main source of them to earn money.

The main rivals of Brighton and Hove Albion in the Premier League battel is Crystal Palace.They are a quite game of the tournament. The team has good honor and reputation in the past performance. They spending a lots of money to survive the competition. They pay much as the player do not leave the side.

The Premier League club short profile is given below.