German Bundesliga refers a football league tournament which is executed every calendar of the year and here playing all the soccer are ranked season by season. Since the inception the top kicker are awarded as the top scorer of the year and get a big amount of prize money along with some extension facilities. Since the prime season the highest score of the tournament marked as 40 which is loudly kicked by Gerd Muller, a Bayern Munich striker in 1971-72 season. After that no one could reach that level. 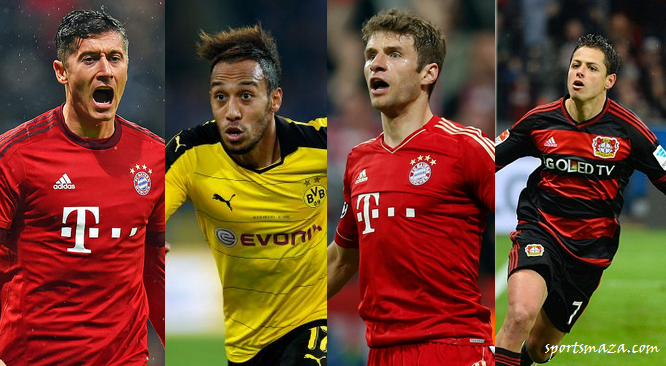 The second highest score termed as 38 which is also grabbed by Gerd Muller in 1968-69 edition. He was such a fabulous goal kicker in ever.

When the topic about the current performer the first name which come out on the front that is Robert Lewandowski. The winger became the last season top score of German Bundesliga. Last season the German played for Bayern Munich and scored of 30 goals so far. After 1973-74 season no one soccer made the score of 30. After a long season some one has been reached the level again on 30. Playing 32 matches on the last season he scored of 30 and world wide fans are really appreciate him for his brilliant approach.

Borussia Dortmund striker, Pierre AUBAMEYANG tapped on the second place of current Bundesliga ranking. His scored was just behind of five goal than Lewandowski. He obtained of 25 goals including 5 assisted by others in 31 matches. This season he being ready to kick same sort and warm up the competition once again.

When we talk about the highest goal kicker, how can we forget the name of Thomas MUELLER, who scored of 20 outstanding goals by playing 31 games in last season. The German winger all total kicked 91 goals for Bayern Munich by apprehending 228 games.

Bayer Leverkusen forward Javier HERNANDEZ Modeste made 17 goals on his 34 appearances and became ranked on 4th place in the last season Bundesliga competition. He is doubly determined to warm-up this season once more. Let’s have a look the top ten goal scorer in the Bundesliga history.

Top ten goal scorer list in Bundesliga all ever

Bundesliga always favorite for it’s outstanding playing record. It is the football competition which successively grown up since 1963. Today the honor of the tournament raise on roof touching level and the credit goes to the respective organizer, clubs and also the footballer who warm up the competition in world wide.