No continuation of football across the Europe due to outbreak of the Corona Virus. But the European giants are preparing their wanted list, whom they want to bring in to their respective clubs. Just like other EPL heavyweights, the Blues are also considering whom they will purchase. The list consists of so many names including some big ones. Lets have a look, which players, they are keen to bring in :

Philippe Coutinho : The Brazilian play maker is one of the major targets for the Blues. The Latin American has revealed that, he wants to make his comeback to the English arena. 4 Premier League sides have shown their interests on the attacking midfielder. But Frank Lampard’s side is in the front queue to bring in the former Liverpool star. He is currently on loan at German Bundesliga side FC Bayern Munich from Spanish side FC Barcelona. 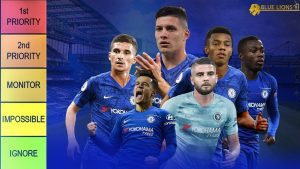 Nicolas Tagliafico : The side from the English capital is desperately looking for a quality left back. They have got number of options and one of them, is Ajax’s Argentine full back Nicolas Tagliafico.

Ben Chilwell : The Leicester City full back was Chelsea’s first target but the Foxes expected to play hardball over the fee of the English man. Thus Chelsea may face a big problem to sign him.

Alex Telles : As I have mentioned it earlier, the Blues desperately does need a left back. According to the reports, the former UCL champions have made initial contact with Portuguese side FC Porto. The Brazilian may cost around 36 million GBP.

Jadon Sancho : The Borussia Dortmund sensation is in red hot form. The forward seemed to be in great touch throughout the season. Chelsea legend John Terry has urged his former side to sign the winger.

Declan Rice : The Stamford Bridge based club is also searching for a defensive midfielder. Thus they have put Declan Rice in their radar as well. Their officials seem to be the admirer of the West Ham midfielder.

Gianluigi Donnarumma, Miralem Pjanic, Lautaro Martinez : They have also targeted Serie A trio G Donnarumma, L Martinez as well as M Pjanic. They are ready to spend 200 million GBP over the trio.