The Confederation of North, Central American and Caribbean Association Football, are commonly known as CONCACAF in together. It acts as the governing body of football in North America, Central America and the Caribbean. The main football tournament arranged by CONCACAF  is the CONCACAF Gold Cup which is held in every 2 years since its outset in 1991. Since then Mexico and United States have dominated the tournament as these two teams have won 12 titles between them and another one was won by Canada in 2000.

Champions list by countries and their title winning year: 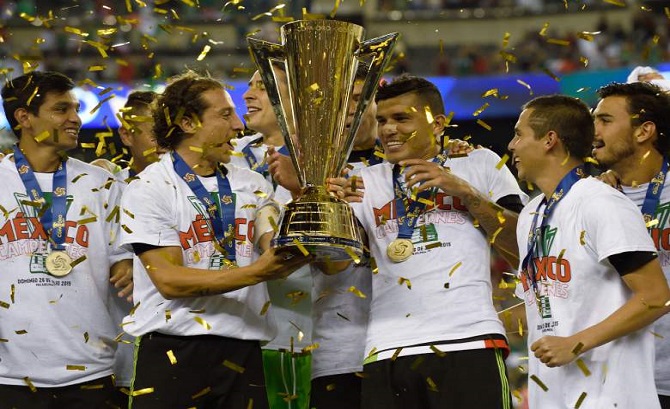 The final match was played between United States and Mexico at July 7, 1991. The game was goalless even after 120 minutes of play. Then United States won the first ever CONCACAF Gold Cup trophy after winning it in the tiebreaker by 4-3.

Before the huge crowd at Estadio Azteca Mexico became champion by beating defending champion U.S.A. in a 4-0 margin and which was Mexico’s first ever Gold Cup championship. Mexican forward Zaguinho scored a total of eleven goals for Mexico in that tournament.

Nine teams had taken part in 1996 edition of the tournament and Brazil being the first team ever to play in Gold Cup outside the CONCACAF zones. and in the first time they went on to the finals to play against Mexico but Mexico outplayed them by beating them 2-0 to win the title for second time successively.

In 1998 participants tally reached to ten and Jamaica participated in the tournament replacing Canada who had withdrawn their name from the tournament. Mexico beat United States in sudden death in the extra time where Luis Hernandez bagged the trophy by scoring a tight goal. And Mexico went on to win their third one by another.

More teams participated in this edition of the event. Canada advanced to the second round through a coin toss turning its face to them as their favor. They beat defending champions Mexico in Quarters and Trinidad and Tobago in the semis. And they had beaten Colombia comfortably by a 2-0 margin in the final. This was Canada’s first and only one CONCACAF Gold Cup trophy till date.

U.S. scored 2 goals in the finals against Costa Rica and did not let them score a single goal. As a result U.S. won their second ever Gold Cup title after 11 years and four tournaments. They beat the then title holder Canada in the semi-final.

Mexico won the 2003 CONCACAF Gold Cup after failing in the last two tournaments. Again after 1996, they beat Brazil in the final in their fourth Gold Cup win by 1-0. They had gained victory over Jamaica and Costa Rica on their way to the final.

U.S. went to the final unbeaten and outscored Panama completely in tiebreaker in the final match as they went on to win the final by 3-1. The game was ended without a single goal from either side after extra time. They won 2-1 over Honduras in the semi-final.

This time United States went to win the title consecutively as they beat Mexico by 2-1 coming from the behind. They have showed some fantastic performance in the knockout stage and it would be unfair if they would not won the title.

It was the third meeting of U.S. and Mexico in the Gold Cup finals and this time it had gone in favor of Mexico as they butchered the title defenders by 5-0.

The most regular finalists met once again in the finals and the result had also been the same as Mexico beat United States by 4-2 in the final. They just could not resist the brilliance and strength of Mexico and this cost them the trophy, because both team were very good throughout the whole tournament.

Panama dominated over the defending champions in the semis and went to the final to face the mighty United States. But their brilliance fall short in front of the four time title winning team as United States won the match by a minimum margin of 1 goal which was scored at the 69th minute of the game.

Six time title winner Mexico added on more feather to their title case as they went on to win their record seventh Gold Cup title by beating comparatively weaker team Jamaica in the final by 3-1.