It is the celebration season of Copa America in USA  which going to kick off from 3rd June. By affixing four new entries the competition will be played by sixteen Latin American teams. All the teams included many versatile footballer for the competition. Let’s have a look the best XI soccer of the tournament.

In the Copa America Centenario tournament the position of goalkeeper is embarked as the high standard level. Sergio Romero is such a outstanding goalkeeper of the tournament where is no competent of him. Last season this Argentine (Romero) had saved the penalty shoot from Juan Camilo Zuniga which was incredible. Sergio was the hero of that quarter-final match which was held against Colombia at Vina del Mar stadium.

The Brazilian Right back originally refers as fabulous defender, who plays on full-back for the National team Brazil also in Barcelona. The 33 years  was switched into a Right-back to take advantage of his lobe caliber. The defender considers an extensive corporal capacity to gear up and down the tagline.  Alves has been parted in the two world cup season as well as four times Copa America along with 2015 edition. 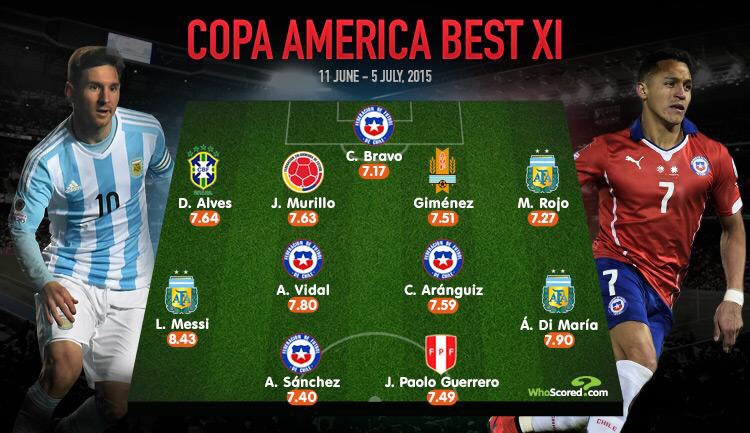 At the 2015 CA in Chile, Zabaleta sent in the cross from which his Manchester City teammate Sergio Aguero headed the only goal of the game as Argentina defeated holders Uruguay in their second group match, This 31 Center-back played in right-back position for The Red Devils club. He refers as the best center back in the upcoming competition.

Diego Godin was appointed as the Uruguay team Skipper on last tournament in Chile, Chile which was totally disappointing season for most successful team of the competition. But the performance of the player have not hide to all. He became the part of 2011 winning season of Uruguay and his performance on the year was too impressive. His quality to cross the ball quickly from midfield to forward really flawless. Hopefuly this year his contribution will blow good luck for the team.

Marcos Rojo is classy defender who battle on left side. The performance of the 26 Argentine totally flawless which has not needed to prove at all. Last year his legendary gaming against host Chile was mind blowing but unfortunately they lost the final.

The cursed defensive midfielder Javier Mascherano was fantastic in last CA. The 31 great soccer was also part in the Copa America 2004, 2007 and 2011. He considered as one of the world’s best midfielder of that tournament.

Christian Pulisic is an American professional who plays on center and a present the member of Borussia Dortmund in Bundesliga competition. He pondered as the most young overseas on Bundesliga competition who made two goal running year. Recently he joined on USA team which will perform in Copa America Centenario 2016 edition.

Club: Real Madrid
The World Cup golden boot winner James Rodriguez become a technical footballer who refer as the attacking midfielder also the winger. He was the top goalscorer in the last World Cup which held on 2014. His game making efficiency and empirical vision really fantastic

When the speech reach on Messi it’s need not to prescribe anything. All know the ability and efficiency of the alien forward. His control in ball and artistic playing style is too incredible. He pull the Argentina in final of CA 2011 and 2015, where he embarked as player of the tournament in both season.

Club: Arsenal
The one more striker, Alexis Sanchez who belongs to Chile national team and one of the greatest forward of the world. His performance was damn good which boost the team got the trophy last year.

The Barca star Luis Suarez is an enormous striker in the world. By apprehending in 85 games the Uruguayan made 45 goals on national side which made him one of the top goal scorer in ever. He became the player of the CA tournament in 2011.