Welcome to Copa America Centenario final event which going to be taken place on 26th June, 2016. MetLife Stadium, which consisted 82,566 audience capacity will host the grand finale on it’s ground. Worldwide TV network eagerly awaiting for holding the media rights of the biggest final and they will cover up the high voltage segment of the tournament all over the world. Watch live match online in our site. The match detail has given below. 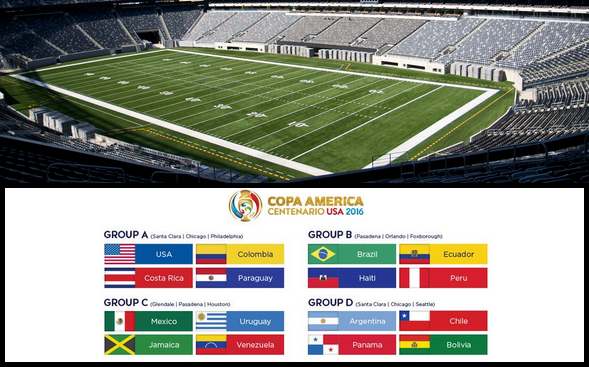 Ticket Limit: The ticket limit conferred as eight (8) for one.

The celebration of Copa America 2016 edition final such a massive event of the season. Instead of twelve, the event started with the sixteen reputed team which conveys sixteen several country in the world. The two winner team of the semifinal round battle for the final trophy and here we make a four name short list who have the more possibility to win the title.

The fourteen time winner and last season runner up Argentina became the most favorite team in the event whose current FIFA ranking in the second position. By holding the world ranking player like Lionel Messi, Angel Di Maria, Lavezzi and Higuain in the side Argentina show onself in the platform than the other contestents. The alien messi along with his team mate are hopeful for the celebration title, so anything is possible for them.

Uruguay, the most successful team of the emulation having the most possibility to warm up once again in the celebration year. The forward and defender of the team is very experienced and they know the way how to control the game. So, they have the most chance to grab the celebration title this year.

The world champion team Brazil has consisted the little more chance to grab the title. The present condition of the team is not so well and the included guys of the squad are maximum young and they have not referred such Type of experience to handle the big matches. They need some experience player in the side and the coach Dunga try to set them for the tournament. Absence of Neymar strongly hit on Brazil team and the pressure rapidly grown up on the air. The team must need dignity and unity to achieve success on the path. At present they rank in sixth place and confident for the championship.

The last Copa America Champion Chile is more confident than ever. Likely the past win boost their confidence level in high. The squad which is made for the celebration season looks much stronger than ever. For their outstanding performance they are ranked on fifth place by FIFA.  Alexis Sanchez along with  Arturo ready for warm up the season final. They have also chance to snatch the title once more.

So guys watch the final match of Celebration Copa America Centenario with us and for any information keep eyeing in our site.