No football to watch for the fans and Sky Sports have invented such an interesting way to entertain them. In fact, the popular sports website is revealing alternative xi of the ongoing EPL campaign. Last night we discussed the best xi consisting of the best dribblers in the English top flight this season. Today we will show you the xi made of the best chance creators of 11 various positions. Lets see which guys have made it into the EPL alternative team of the season for making the most number of chances :

Nick Pope : The Burnley keeper is the man between the sticks for this xi. The Clarets have taken direct approach this season which has helped their keeper involving himself in creating 3 chances. The number of chances Pope has created is 3 times as many as the other keepers have created. 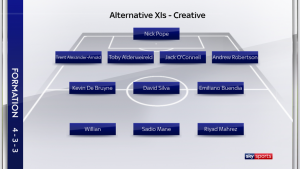 Trent Alexander Arnold : The young sensation of Liverpool makes his way into the team. The full back has occupied the right back position in this selected side.

Andy Robertson : Nope, TAA is not the only Liverpool player in this xi as his fellow team mate Andy Robertson has also been picked.

Toby Alderwireld : The Belgian center half of the Tottenham Hotspur is one of the two selected center backs in this xi.

Emiliano Buendia : Buendia has been absolutely sensational this season. The Norwich star is the only man common in both of the alternative xi. He was among the top 5 dribblers and is also among the top 5 chance creators.

David Silva : Even at 34, the Spaniard hasn’t stopped showing his class at the heart of the field. He is in top 3 with creating as many as 2.4 chances per 90 minutes.

Kevin De Bruyne : Who else but KDB to top the chart. The Belgian sensation is one of the best footballers in the league and no one has created more chances than the former Wolfsburg star. The two footed midfield master has created 3 chances per 90 minutes, at least half more than any other players during this period of time.

Riyad Mahrez : Pep Guardiola should be very proud as the team includes 3 of his Man City lads. So the Sky Blues (and Liverpool) do have the highest number of representatives in this side. Riyad Mahrez is the 3rd Citizen along side KDB and Silva.

Willian : The departing Chelsea star is the only Latin American to make into this side.

Sadio Mane : Liverpool star Sadio Mane is the 3rd Red to get selected into this side. The Senegal international is the man in the middle in the final third.