Hello folks, it’s yet another day and we have brought another alternative team of the season. The thanks must go to the Sky Sports. The London, UK based popular sports website has revealed the 3rd alternative TOTS of the EPL. On the first occasion the side included the best 11 dribblers of this ongoing league season. Then yesterday the side consisted of the 11 best chance creators. Whatever, today they have revealed the xi of the 11 best finishers of various positions of this ongoing EPL campaign.

Ben Foster : The England international made his way into the team for being the only goal keeper to register a shot on target. No other goalie has been able to take any shot on target in this ongoing EPL campaign.

Ricardo Pereira : The Leicester right back has been in pretty good form. He was not only in the best dribbler’s xi but also booked his place in this xi. 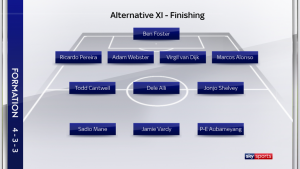 Marcos Alonso : The Chelsea full back is pretty much known for his attacking skills. The Spaniard scored from each of his last 3 shots on target. Yes, that’s really impressive!

Virgil Van Dijk : The name you were searching at the heart of the defence. The Dutch sensation has taken 23 attempts on goal and scored 4 goals, the joint most by any EPL defender.

Adam Webster : The Brighton center half partners VVD for his 3 valuable strikes. The CB has just taken 14 shots in his way of netting those 3.

Dele Alli : The Tottenham midfielder is the first choice in the midfield. The English man has an impressive conversion rate of 20%. He has scored 8 goals so far this season in exchange of only 40 attempts.

Todd Cantwell : The Norwich man gets his place due to the clinical performances specially in the first half of the season. However, he has failed to score since the New Year’s Day.

Jonjo Shelvey : The veteran Newcastle Utd star is the another midfielder in this side. He has taken 10 shots on target and managed to put the ball in the net on 5 occasions.

Sadio Mane : With a superb conversion rate of 23% Sadio Mane is 3rd in the chart. The Liverpool forward is one of the 3 chosen attackers in this side.

Pierre Emerick Aubameyang : The Arsenal skipper’s conversion rate is as high as 26%. Thus there is just one player who has a better ratio than the Gabon international.

Jamie Vardy : Leicester City talisman Jamie Vardy has been the EPL’s best finisher this season. The prolific number 9 has scored one goal in his every 3 chances and has an outstanding conversion rate of 32%.