We are informing you about the outgoing players of every Premier League clubs. In this episode, we will discuss about the Everton players who may make their way out of the Goodison Park. Take a look at the list of the guys, whom the Marseyside Blues have placed in the transfer list :

Oumar Niasse : After having good two seasons with the Russian club Lokomotiv Moscow, the Senegalese signed for the EPL side in 2016. It’s his 4th season since he arrived at the Goodison but the Marseyside Blues sent him out on loan twice during this period. In 2017 he joined Hull City on loan and last year Cardiff City signed him on another loan deal. In fact, the Senegalese failed to concrete his position at the Goodison. A number of managers came and depart but his fortune didn’t change. Everyone expected Niasse to leave in the last summer. But somehow he stayed at the club. On this occasion, the odd is in the favour of the departure of the 30 years old forward. 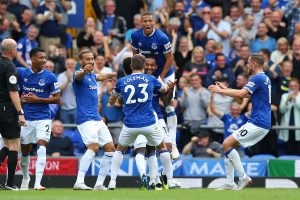 Cuco Martina : The Dutch man started his journey in the English top flight back in the 2015. He joined Southampton from Eredivisie side FC Twente in 2015. After two average seasons with the Saints, he arrived at the Goodison Park in 2017. Then they sent him out on loan at the Stoke City before he once again left for Feyenoord on another loan deal. However, the full back was actually a back up sign for Seamus Coleman by thenceforth manager Ronald Koeman. The 30 years old right back hasn’t made any first team appearance this season. Thus it seems highly likely that he will leave the club this summer.

Marteen Stekelenburg : The Dutch goal stopper also signed during the time of Ronald Koeman. He used to be their first choice keeper during his early days at the Goodison. But as the days passes, the former Netherlands international got older and became the optional keeper for the side. Now he lives in the shade of Jordan Pickford, the currently English number one. Thus we very much expect him to depart the club in this upcoming July.

Leighton Baines : The full back have had a wonderful career at the Goodison. He is one of their longest serving stars of the modern era. He has been their number one choice in the left side of the defence for a long long time. His contract is running out and will expire on June 30. However, the former English international still has a chance to stay at the club.