18th edition of FIFA Under 17 World Cup 2019 is going on held in South American football loving country Peru those are the 2nd time host nation of this competition. 2019 FIFA U-17 World Cup Schedule draw will be held on spring. The only team Peru is qualified for this biggest tournament as a host nation. Matches of this U-18 WC will be took place in 8 different cities of Peru including Chiclayo, Ica, Lima, Chimbote, Piura, Tarapoto, Tacna, Trujillo etc.

Though event will be held on 5 to 27 October, 2019. All confederation team according to quote and qualifying system AFC, UEFA, CAF, CONCACAF, CONMEBOL, OFC Under seventeen team will take place in this superstar making tournament. Total 24 teams will be participated where as 52 matches will be played among them to pick of the Champion. All group stage matches time set at PET (UTC-5). 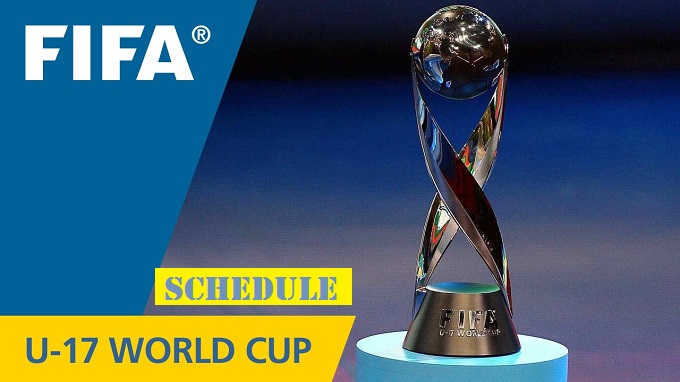 Just after the announcement of this fixture by FIFA, we will release the full schedule with download link here. Still qualifying round going on and expected fixture release month is March, 2019.

FIFA Under Seventeen and Under Twenty WC is the future of Football. Morning shows the day and a U-17 team shows the future performance of a country in main World Cup. But the statistics is slightly different where as Nigeria is the most time U17 WC winning nation. Though Brazil won 3 times but the legendary football nation like Germany, Argentina, Italy don’t have any title on this competition. Football specialist saying for this issue is, most of the child footballers can’t get proper support in right moment where as those nations have opportunity to guide young footballers in club football they become do well after a period of time.

English young star Rhian Brewster was the top scorer (8 goal) of U-17 WC 2017 in India and right now playing in Premier League as a part of FC Liverpool. Lot of superstar shown their skill in this type of tournament but their proper utilization depends of the country. FIFA tried to encourage very young players to find out the next generation Pele & Maradona. As England have lot of scope in club football that’s why a footballer like Rhian Brewster get lot of opportunity. Mali sticker Lassana N’Diaye also scored 6 goal on this tournament but didn’t get any call from renowned club. Spanish young Abel RUIZ scored 6 and right now a footballer of Barcelona B team. German young forward Jann-Fiete ARP also scored 5 on this tournament and took place at Hamburger SV. 1st, 3rd & 4th position sticker getting proper training for the future but the 2nd position holder Lassana N’Diaye getting lack of opportunity. This is the fact, why a national team can’t grow up according to the ability of their young stars talent.

If we consider the performance of U17 World Cup it’s mention that Africa have huge opportunity to make more world class footballer but they are not getting sufficient support. Where as European team going forward due to excellent environment of club football in their nations like Premier League in England, La Liga is Spain, Serie A in Italy, Ligue 1 in France, Bundesliga in Germany etc.

U17 WC started in the year 1985 which is also won by Nigeria. This tournament last time held on India where England and Spain under 17 team participated into the final match. England junior team first time won their title at Indian soil.