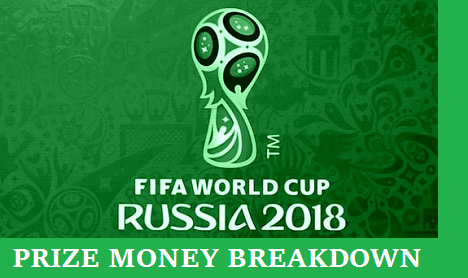 Federation Internationale de Football Association which is simply known as FIFA is pondering to spend a huge amount of money in upcoming 21st edition of FIFA World Cup which will be scheduled to stage in next 2018 and Russia will be the host nation. FIFA is planning for making upcoming edition amazing over last two years and as a part of their plan, they are going to increase the competition rewards of the largest football competition almost 22% than previous episode.

In last season of FIFA World Cup 2014 which was placed in Brazil, then Germany was the winner and got pocket around $35 million for the title and team Argentina claimed around $25 million due to being runner-up. So, considering all calculations, in last episode of FIFA tournament, total cost was around $576 million.

Though, official announcement about prize money of upcoming World Cup 2018 Russia is yet to be declared but considering it an advance, here we present the total amount along with 22% increasing below, according to the reliable sources.

According to the news, the prize money of upcoming world cup would be totally around $700 million after increasing 22% than last time where in last time total cost was $576. As stated by above statistics of reward amount, champion team will get almost fifty million dollar where in last time was thirty five million. According to the same rate, runner-up will get forty million instead of twenty-five. Though, there are still many prize details are yet to be revealed like insurance fee of the players and payment to parents club of player by player rewards and so on.

However, last time the player insurance fee amount was around hundred million dollar where payment to the parent clubs rewards was $70 million. So, if we consider to increase this amount according to the same rate, then obviously it would grow heavier.

However, FIFA is regarded as the biggest sports governing committee and continuously, they are increasing the prize money of the world’s most exciting tournament gradually. As a part of their plan, they are going to increase this amount once again and so, the competition would be amazing. Besides, FIFA able to make a huge revenue from the tournament which generally held once every four years. If we look to the last tournament, FIFA claimed almost $4.8 billion through the World’s biggest competition where their total expenses were not more than $2.7 billion. As a result, they got $2.1 billion profit through the event. So, basically, increasing competition reward would never affect the FIFA authority but to make the tournament more glorious.