FIFA World Cup, commonly known World Cup Football is an international football championship authorized by Federation Internationale de Football Association (FIFA) which is the largest football competition in the world. The inaugural season of FIFA World Cup was held in 1930 which was hosted by Uruguay. Since then World Cup used to held after every four years except 1942 & 1946 cause of 2nd World War. By now, twenty season of World Cup has already passed away where total eight (8) different nations has claimed this mighty World Cup Championship title. Among them, team Brazil has won highest five (5) times trophy, Italy & Germany have won four titles each, Argentina & Uruguay have grabbed two titles both and rest England, Spain and France have also claimed one title each. 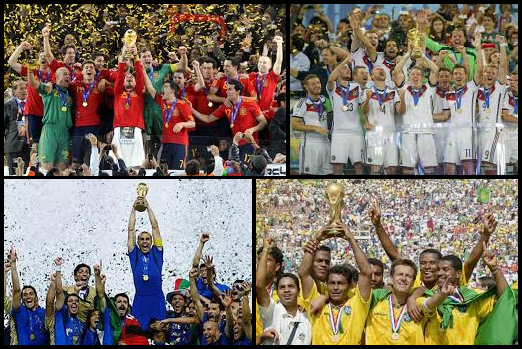 Brazil is the most successful team in FIFA World Cup and they are the only team which have took part in every World Cup events. The current champion is Germany which is their fourth title.

Besides this TV networks, more channels have covered the football matches of FIFA World Cup according to the country. Also everyone can enjoy this exciting matches through internet.