Conte can take breath now. His team defeat Italian most popular club Milan by 3 – 1 into the last International Champions League match. Man of match award goes to Brazilian star Oscar’s side who scored the winning goal and a success penalty shootout. Traore’s goal keep ahead the Blue lions within 24 minute but Bonaventura’s goal made the score level and half time result was 1 each. 2nd half was the magical moment by Oscar which guide the blues to win. This great performance of this Brazilian star can change the mind of Conte to sell him in this summer.

One of the major contender of English Premier League Chelsea is currently ranking in 10th position after finishing 2015/16 EPL season. Before starting upcoming challenging season, they have to prepare themselves where their chief Antonio Conte is currently to rearrange their attacking division. Here is a chance has come to prove his new pattern where they are on pre season schedule. Now, they are one of 17 selected teams in International Champions Cup 2016 where they played already two matches and scheduled for third against Italian side AC Milan. Milan also played two matches in this tournament. Their third which will be also last match will be staged in next 4th August, 2016. 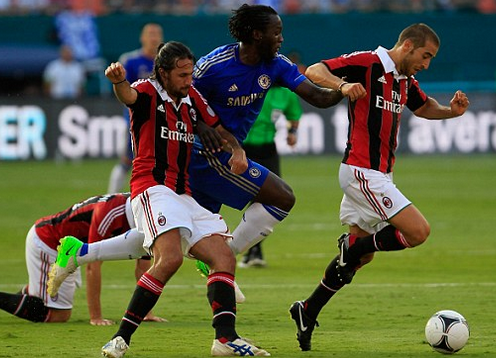 # Key Players of the Devil: Rossoneri is currently led by Italian playmaker Riccardo Montolivo. They have some talented players. Besides, Carlos Bacca is their best striker in this summer who would be the key player. He was the Milan’s top scorer in last season. And also need to mention another regular striker from France named M’Baye Niang who scored already once in this tournament. Alongside, Slovakian Kucka and Italian Bertolacci both scored one goal each in their first match in this ICC 2016 against Bayern Munich which makes them key players.

# Key players of the Blues: Chelsea has a number of good players in their current team squad though they would not place their best eleven in such kind of friendly match. But some of them will play for sure. Like Belgian playmaker Eden Hazard played previous two matches where he scored a couple of goals. Michy Batshuayi is their national teammate who have possible chance to perform in next match. Their regular skipper John Terry will lead them in field hopefully.

# Prediction: Though, Chelsea and Milan are two big clubs in their own league but if we consider their recent statistics, the Blues are just one step ahead of them. So, the prediction is – Chelsea 2 – 1 AC Milan.