After a win against Bayern Munich, this renowned Italian club was much more confident in front of the reds. Milan won against Bayern by 5 – 4 penalty shootout 3 days back. Definitely, this kind of performance made them favourite against Premier League middle order but most renowned club FCL. On the other hand, the reds proving them again in again in friendly events. Though they lost against Chelsea into the last match but won rest of 5 matches before the season. Divock Origi & Roberto Firmino’s goal in 2nd half, guide this English club to win over the most renowned club of Italy.

Liverpool and AC Milan are scheduled to play their next match against each other in International Champions Cup 2016 tournament in next 31st July, 2016. It will be the 2nd match of both teams in running ICC. Both teams have won their first match in this competition. 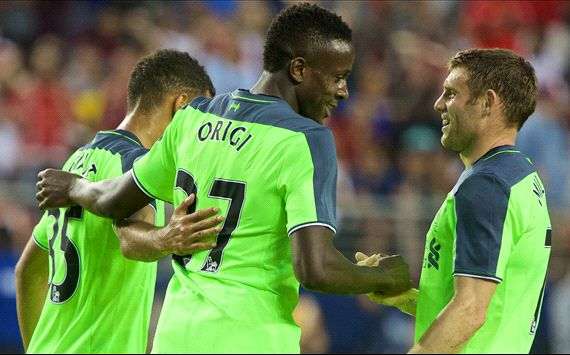 # Arena Details: The Reds will meet with the Rossoneri at Levi’s Stadium which is situated in Santa Clara, California, United States. This ground has 68,500 seats capacity with 176 suites. The surface of the ground is made by Tifway II Bermuda Grass. It was opened in 17th July, 2014.

# Head To Head Comparison: The Reds have played against the Devil three times before where the Reds won twice and rest one was won by the Rossoneri. They first fought in 25th May, 2005 and last met in 3rd August, 2014. Upcoming match will be their fourth fight.

# Starting Line Up of Liverpool:

# Starting Line Up of AC Milan:

# Last Five Matches Statistics of the Reds: Liverpool last met against Huddersfield in 20th July, 2016 which was a club friendly in the tournament of ICC 2016. They defeated Huddersfield by 2 – 0 goals. According to their last five matches, the Reds lost only one against Sevilla by 1 – 3 which was the Europa League Final. The rest four matches were won where they defeated Tranmere, Fleetwood, Wigan and last Huddersfield.

# Last Five Matches Statistics of Rossoneri: Before starting next Serie A season, AC Milan has played just one friendly match till now where the match was won where they played against Bayern Munich. And after 90 minutes, the match was tied by 3 – 3 goals. Next, Rossoneri won the match by penalty shoot out 5 – 3 goals distances. Among rest four matches, they lost two against Juventus and Roma, Won one against Bologna and drawn one against Frosinone.