Goldman Sachs released a prediction of this tournament few months back by analysis big football data where French team got 23.1% chance to win this Euro cup where Albania was in lowest position by having 0.1%. People though a big difference of result into this match. But the nation of Mother Teresa played extremely well against home team. Made few opportunities as well to score goal against the host nation but they have lack of skill & confident surely. Lot of attempt by french team would be successful but somehow their struggle stopped by Albanian defenders. But finally 89′ goal by Atletico Madrid forward Griezmann & extra time goal by Dimitry Payet made the result 2 – 0. 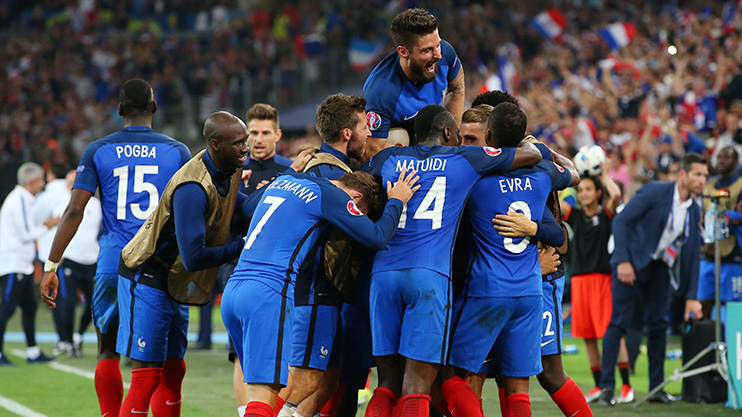 Two times UEFA Euro Championship winner in 1984 and 2000, France is one of the strongest contender of the title of the Euro 2016. This season of UEFA Euro 2016 is the 15th edition which is hosted again in France for third times. So, team France is considered one of the three most favourite in this UEFA Euro season.

France has played their inaugural match in the Euro 2016 against Romania where they beat them 2 – 1 goals. Now, they are scheduled to play their next match against Albania. It will also be the 2nd match of Albania where they have lost their first match against Switzerland by 0 – 1 goal. Albania and France have been placed in group A with Romania and Switzerland. Three group stage matches will be played by each team where top point holder two teams will be given approval for next round.

# Preview: Total twenty four participants will compete in UEFA Euro 2016 and they are divided into six equal groups, four teams in each. In group A, team Albania and host France are scheduled to play against each other in next 15th June, 2016 at Stade Velodrome, Marseille which will be the 15th match of the tournament. This field is situated in Marseille, Bouches du Rhone, FranceI which is a is a multi purpose stadium in the host nation. It has 67,394 seats capacity. City of Marseille is the owner of this ground and surface is AirFibr hybrid grass. It was opened in June, 1937 which was architect by Henri Ploquin.

# Head To Head: France and Albania totally played against each other six times. Among them French won four and Albania won one time. One match was drawn. Last they met in 13th June, 2015 which was an international friendly and there Albania defeated French by 1 – 0 goal.

# Teams Lineups: French national football team has many talented players and they used to play with three forward. Dimitri Payet, Antoine Griezmann and Olivier Giroud have possible chance to play next match against Albanian team as forward or winger. All of them are in form now. Besides, Paul Pogba is a genius midfielder. With him, Kante and Blaise Matuidi would probably play. Hugo Lloris is their current skipper and also the main goalkeeper. Their playing formation is 4 – 3 – 3.

Albanian team is currently captained by Lorik Cana and he is the famous defender. But, he would probably miss the next match. Their playing formation is 4 – 3 – 3. Etrit Berisha is their regular goalkeeper.

# Prediction: Team French would probably win their next match against Albanian cause their current performance is too well. They have won their last five match where Albania has won only two out of five matches. Besides, it is the host nation of UEFA Euro 2016 which will give them extra confidence and encourage them by their supporters. So, the prediction of the match between France and Albania is – FRA 2 – 0 ALB.