The reds fans confidence growing on Kloop in this days. But still they are suffering and can’t win regularly. Yes, their pre season events performance was excellent but their losing against Chelsea and right now against Italian club AS Roma made them hopeless. Bosnia striker Edin Dzeko scored first goal for the Wolves within 28 minute which give back by Sheyi Ojo in first half + 1′ extra time. Match became to exciting but Egypt footballer Mohamed Salah’s goal keep ahead the Wolves by 2 – 1. Though the reds tried hard in last 30 minute but that was full of incomplete attack.

English side Liverpool has completed their last Premier League season and standing in 8th position in EPL point table. They are now on their pre season tour schedule. They have already played five friendly matches where four of them were club friendlies and rest one was a part of International Champions Cup 2016. Now, this English side is scheduled to play against Italian Roma in next 2nd August, 2016 which will a club friendly match. On the other hand, Roma has played three pre season matches in this summer and also ready to meet another one. Currently, the Magic One is considered as one of the big Italian club which finished their last Serie A season with 3rd place. 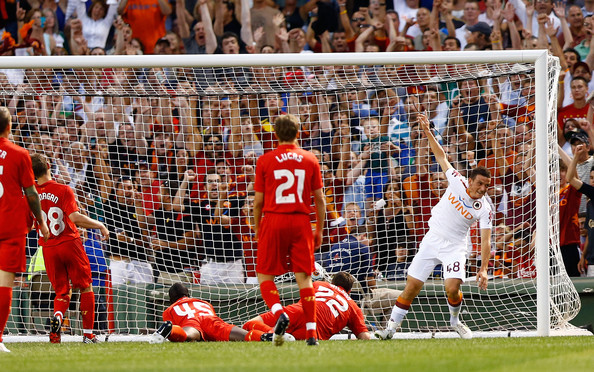 Liverpool and Roma totally played each other six times before where Roma won three times and Liverpool won twice. Rest one match was drawn. They last met in 24th July, 2014 which was a club friendly where Giallorossi defeated the English side by 1 – 0 goal. So, upcoming match will be their 7th fight. Here we present their previous fighting result below.

# Key Players & Recent Statistics of the Reds: Brazilian star Roberto Firmino is considered the current key player of the team LFC due to his last season performance. He was the top goal score in Premier League in last EPL season who netted 10 times. Besides him, Daniel and Coutinho were also the two top scorers in all matches where Coutinho scored 12 and Daniel scored 13 goals so far. Sadio Mane is their newest addition who would be dangerous for the opponent.

According to their last six matches, they won four and lost twice against Sevilla and Chelsea.

# Key Players & Recent Statistics of the Magic One: Mohamed Salah is regarded as the current star who score highest amount of goals in Serie A with them. He scored 14 league goals and also in all competition is last season, he was the top scorer with his 15 goals. Miralem Pjanic and Edin Dzeko would possibly be their trump card.

Roma won five matches out of their last six matches and lost one against Al Ahly by 3 – 4 goals.

# Prediction: The next match between LFC and the Magic One, the possibility goes to Liverpool. So, the prediction is Liverpool 2 – 1 Roma.