From the beginning of the match, FCB started to attack again and again but Lionel Messi & Neymar made more opportunity to score goal by lot of attempts. Fernando Torres surprised the football world on 25 minute of the match by his goal for ATM. It was a great opportunity made for the Atletico’s. But 35 minute foul of Torres forced match referee to give him red card which change the match result. 10 man squad surely was not enough against FCB. Half time finished with 1 – 0 as well. But Barcelona didn’t stopped to attack and get success on 63 & 74 minute by pair goal of Luis Suarez.

Defending title holder of Champions League Barcelona will host the first leg match of the quarterfinal at Camp Nou on 6 April 2016. This is third successful season for Barca in Champions League, they are unbeaten in this season and they played 8 matches in group stage. They won 6 of them and draw in two matches, they beat Arsenal on knockout stage very easily. Adriano and Sandro Ramirez was not available for hamstring injuries. Injury problem also make worry in Atletico Madrid squad. Lucas Hernandez may not available for his back problem and Diego Godin, Jose Gimenez and Stefan Savic also out of the squad due to injury issues. Barcelona desperately looking to bounce back after defeating against Real Madrid and that’s why they will be play this match with all of their strength. 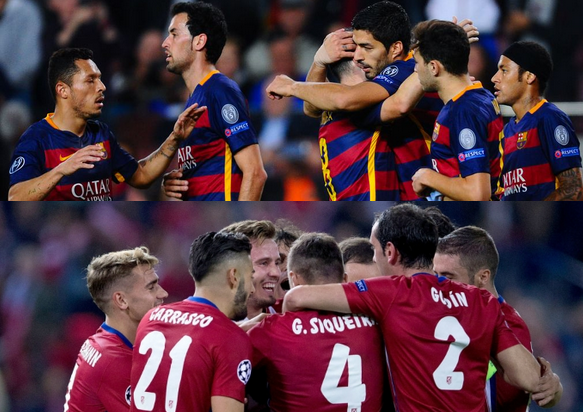 Match between: Atletico Madrid vs Barcelona

Both team performing highest level football and it’s really hard to say the prediction. Into the last match in El Clasico, Lionel Messi’s team lost against the team of Cristiano Ronaldo which make pressure to the team. Fernando Torres would just another obstacle in front of Barcelona as well.