Liverpool is a Big English club which is usually competes in English top professional football competition Premier League. EPL 2016/17 season has just started and the Reds have already  played their 1st match in this tournament against the Gunners and won the match. In the meantime, they are scheduled to play an EFL Cup 2016/17 match against Burton Albion where club Brewers has just promoted to Championship League from League Two. Football League Championship is the 2nd highest football league competition in England which is also known as Sky Bet Championship. The match will take place in next 23rd August, 2016. 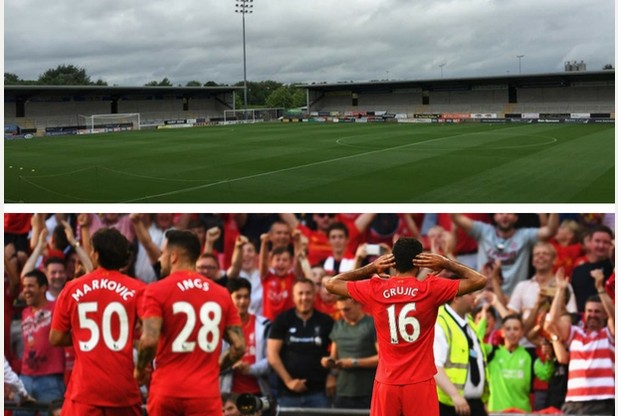 # Short Informations of Hosting Arena: Pirelli Stadium will be the host venue of upcoming competition between Liverpool and Brewers. It is a small arena which consists of only 6,912 seats capacity which is located near the Staffordshire. Burton Albion is the current owner of this arena.

# Possible Line Up of the Reds:

# Possible Line Up of Brewers:

# Recent Performances of the Reds: Liverpool won their last match against Arsenal by 4 – 3 goals. Considering their last five matches, they won three against Barcelona and Milan along with the Gunners and lost twice against Roma by 2 – 1 and Mainz by 5 – 0 goals.

# Recent Performances of Brewers: Brewers won two matches out of their last five against Bury and Sheffield. They played their last match against Sheffield and won by 3 – 1. But they lost against Bristol City, Nottingham Forest and Mickleover Sports.

# Prediction: Considering their recent statistics, the Reds are far better condition than Burton where Liverpool is examined one of the Big Four club in Premier League. So, the prediction is – Liverpool 3 – 1 Burton Albion.