Belgium star Eden Hazard saved the blues by last 10 minute from big losing. Galacticos shocked Conte by scoring 3 goals within 1st half. It’s sounds strange that Brazilian defender Marcelo scored 2 goal for the club of Madrid and keep ahead them. Another goal scored by Diaz Mejia. It’s seems the blues are going to destroy in front of Galacticos. But Chelsea came in form into the 2nd half. Excellent skill and double goal by Hazard in the ending moment of the match saved his team and give pleasure to English fans. Though the blue lion fans expected a win against as like this Real Madrid lineup but this result isn’t so bad at all.

The University of Michigan ready to welcome two big club Real Madrid and Chelsea on 30 July 2016. Chairman of Relevant Sports Charlie Stillitano said “We are relay glad to welcome two famous club of the world Real Madrid and Chelsea. Manchester United and the Galacticos played In 2014 on the same ground and set record attendance and this time we expecting another great crowd in Chelsea vs Real Madrid match. he also said Real and Chelsea are two biggest club in the world. This will be the most exciting match of the tournament and we are excited too about this match”. 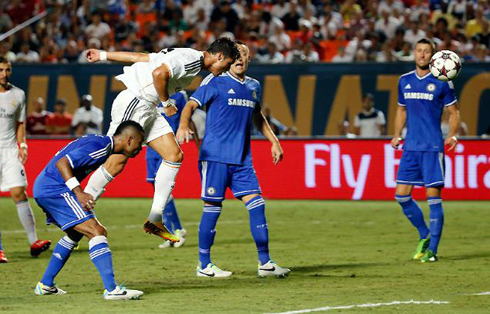 Match between: Real Madrid Vs Chelsea

Galactico Cristiano Ronaldo recently won the UEFA Euro title for his national team and last season he play key role to winning Champions league for his club. He is one of the best footballers and recognizable athletes of recent time across the world he is three-time FIFA Player of the Year and top contender this year too. FCR also have Gareth Bale and James Rodriguez who are also valuable players of them. On the other hand Chelsea have Diego Costa, Eden Hazard, and Oscar to challenge Rial on International Champions Cup match.

Possible playing XI of the Galacticos:

Possible playing XI of the blues:

Prediction: The Galacticos is the possible winner of this match in front of the blue lions and the result would be 2 – 1.