Finally English club Manchester United finished their season by FA Cup title achievement. As Man U passed a bad season and this title can be a consolation for them. Though it was an expected win for the reds but C palace played extremely well into the match. Puncheon’s 78 minute goal was great shock for the most time Premier League winners. But Spanish footballer Mata’s goal saved the match and made the score 1 – 1. Match goes to extra time and the winning scored by Lingard on 110 minute.

Welcome to Football Association Cup final event between Man U vs C Palace. The both club has shown a diplomatic playing format in full season long. Manchester United rocked at Wembley Stadium in front of 86,064 live audience against Evertoon, where they loudly beat the opposition by 2-1 goals and qualified themselves in Final. On the Other side by defeating Watford in second semi final on Sunday, C Palace also able to send themselves in the final. Now the both team battle for the FA Cup 2016 Trophy. The grand finale will be apprehended on 21st May, Saturday which will be hosted at Wembley Stadium in London. The both contestants Manchester United and Crystal Palace are gearing up for the final match which conferred as the most arrogant event of the tournament. Here the match detail in below. 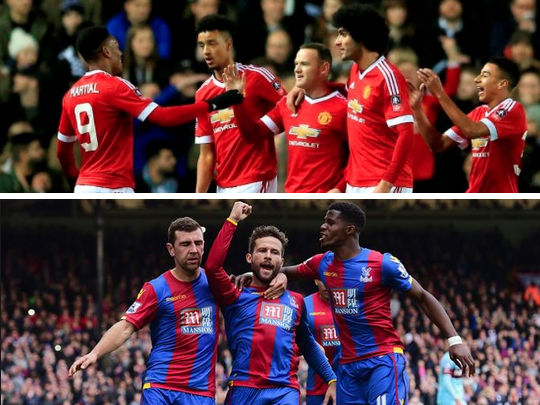 Best line up for the final event (Manchester United)

A Valencia (A MF)

Best line up for the final event (C Palace)

The Red Devils has set the team for the final event barring of injured Marcos Rojo and the defender has been replaced by Cameron Borthwick-Jackson. The injury also kept out the midfielder Morgan Schneiderlin from the FA cup final event.

However, Yohan Cabaye and Connor Wickham are both backed in the Crystal Palace side but they not included in the best XI. On the other side the midfielder Wilfried Zaha is also doubted to include in the squad because the Crystal are set their 4-2-3-1 formation already.

The expecting match gonna be the 135th final event of FA Cup and the match going to repeat the 1990 Final match where Crystal Palace were beaten by Manchester United in 1-0 score. The Red Devils are became the eleven time champion of the trophy and it will be the eighteenth contribution on FA Cup final. On the other hand it going to be the second time for the Crystal Club in Fa Cup final and with United’s elevated scoring record, possibly they seduce some flutter fash.

Though The Red Devils are more favorites than The Palace in the tournament, The Palace have also little chance to grab the title. World wide fans are eagerly awaiting for the most exciting final event. So guys be ready to watch most happening match of the season and keep eyes in our site to get update.