Alvaro Morata can keep ahead Spanish team within 4 minute. Excellent cross by Manchester city winger David Silva but it was a good effort by Petr Cech. By the statistics review by goal dot com for this match, Morata mentioned as the worse performer of this game. Though this is part of the game. Another opportunity missed by Real Madrid wall Sergio Ramos which was an hard task surely. 2nd half starting performance of Czech team was extremely awesome. Lot of attempts saved Spanish defender and De Gea. However, finally the red fury’s dream drastically by Andres Iniesta whose fabulous cross made easy for Gerard Pique to head and touch the rope.

Big moments of this match with goal highlights video …

Spain is one of the two most successful team in UEFA Euro by winning three (3) titles of it and they are also the defending champion. Team Spain is one of the top contender of running UEFA Euro 2016 which is the 15th edition of the Euros and has started from 10th June, 2016. Total twenty four (24) teams are participating here for this most glorious title. It is considered the world’s second largest football competition after FIFA World Cup. Among twenty four (24) qualified participants, Spain is placed in group D and rest three group mates are Croatia, Turkey and Czech Rep. Each team will have to play three matches in group stages with rest three group mates and top two teams will qualify for next round. 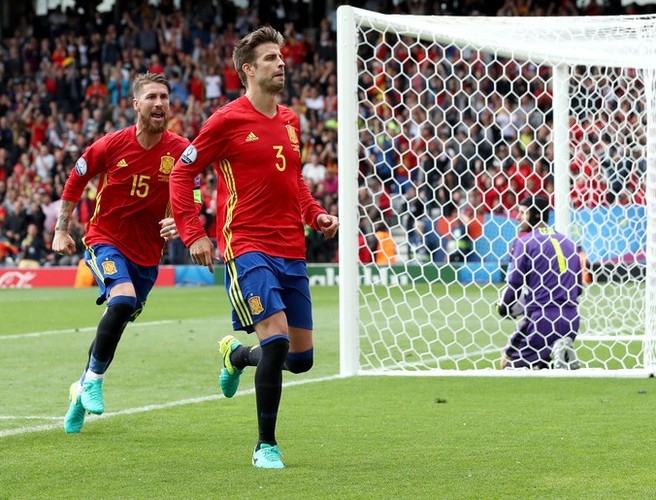 # Preview: Spain will play their inaugural match in UEFA Euro 2016 against Czech Republic which will be the 8th match of the tournament and it will be staged at Stadium Municipal, Toulouse in next 13th June, 2016. It is the largest stadium in France which consists of 33,150 seats capacity. It was established in 1937 and surface is grass.

# Head To Head: CZR played against Spain total four times but did not claim any win. SPA won three times and rest one match was drawn. They last play 7th October, 2011 where Spain beat them by 2 – 0 goals.

# Teams Lineups: Spanish team is currently captained by Iker Casillas who is a goalkeeper. Besides him, David de Gea could possibly play in the main event of the Euros 2016. Gerard Pique, Marc Bartra, Jordi Alba and Juanfran have maximum chance to play next match against Czech Republic as defender. Team Spain used to play 4 – 3 – 3 formation. This time it would not change hopefully. Sergio Busquets, David Silva, Andres Iniesta or Cesc Fabregas or David Silva will play as a midfielder or attacking midfielder. Attacking side depends on Alvaro Morata and Nolito hopefully.

On the other hand, Czechoslovakia usually plays according to 4 – 2 – 3 – 1 formation. In their next match, Petr Cech would probably be the goalkeeper and Tomas Necid will lead the attacking division.

Though, according to the statistics, the team of Vicente del Bosque is far better condition than the team of Pavel Vrba but their next match will hopefully be contesting.