Bad luck of the team of Enner Valencia as their goal on 66′ by Miller Bolanos become disallowed. Just when the ball passed the ending line, he shoot into the ball which defeated Brazilian goalkeeper which was an easy task to save by the goalkeeper. But match referee didn’t allow this by took a good decision. Good luck for the team of Dunga as they saved by loss into their 1st match.

Brazil is considered the third most successful team in Copa America by winning eight title of it. They are going to compete again in Copa America Centenario as a strong contender of the trophy. Brazilian football team will play their inaugural match in this tournament against Ecuador in 4th June, 2016 at Rose Bowl, California, USA which will be the 4th match of the tournament of CA 2016. 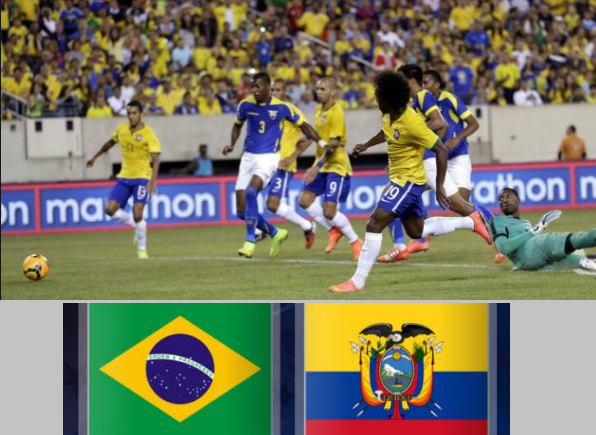 Team Brazil is one of the most supported team in the world as well as Copa America and also they are 5th times FIFA World Cup champion. They are treated as one of the best team of all time. Though, they are standing on 7th position according to FIFA ranking but they have possible strength to destroy Ecuador in field. Regular Brazilian captain Neymar Jr will not participate in this historical event of CA along with Kaka and Rafinha. Kaka and Rafinha are suffering from injury. Due to the lacking of their regular skipper, team Brazil would suffer in this tournament. However, the next match of Brazil against Ecuador, they are treated as a favourite. So, let’s have a glance below where their next match details is given.

Brazil and Ecuador totally played against each other 29 times where team Brazil won 24 times and Ecuador won only two times. Three matches were drawn. So, it is proved that, Brazil is too strong opponent for the team Ecuador. But Ecuador will try their best to present better performance in their upcoming match against Brazil.