Uruguay is a top rated CONMEBOL team and has pretty good records in International football. But Egypt has no such things. They are here in the season of FIFA World Cup 2018 to make some records. This two teams are now in the same group which is group A. Each group of the tournament FIFA World Cup consists of four teams where the rest two teammates of them are Saudi Arabia and host nation Russia. This two teams Egypt and Uruguay will start their World Cup journey in 15th June, 2018 which will be the 2nd match of the tournament. 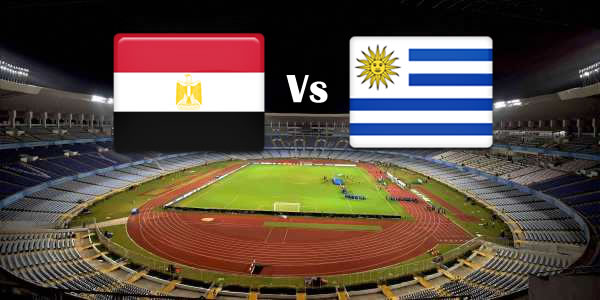 # Hosting Venue Details: The match between Egypt and Uruguay will be hosted at Central Stadium. The venue is located in Yekaterinburg, Russia. Consists of 35,696 seating capacity the arena was founded in 1957. The venue is also called Ekaterinburg Arena.

# Egypt Vs Uruguay Head To Head:

Uruguay and Egypt are from two different confederations and so, except the occasion, this two teams does not face against each other. Earlier, this two teams have faced against each other once. The match between them executed in 16th August, 2006. The match was an international friendly competition. In the match, Uruguay beat Egypt by 2 – 0 goals. Most surprisingly this two teams are placed into the same group in upcoming FIFA World Cup 2018. The group is A where Russia and Saudi Arabia will be their teammates.

# Team News of Uruguay: Team Uruguay is very balanced currently. The team is led by great defender Diego Godin. They have plenty of star players in the squad. Most amazingly they have strong forward section. Consists of Cavani and Luis Suarez the section is very powerful and can make a bad dream to the opponent team. Suarez can be called one of the most potential player in club level as well as Cavani. Their current statistics are also impressive. They won three matches out of their last five matches. Two of them were in China Cup and rest three were in International friendly competitions.

# Team News of Egypt: Team Egypt has no such types of star players like Uruguay. But they have a legendary striker who is Mohamed Salah. He is playing for the English club Liverpool. He led Liverpool to the Champions League final this season. He is the top scorer in EPL this season and also got the trophy of best player in Premier League as well. Along with him, team Egypt has a hope to do better. If we consider the last five matches of Egypt, their performance are so frustrating. They won just once but faced defeat twice times so far.