It was seems this match going to be flood of goal as all four goals Real Madrid scored before the half time. James Rodriguez, Lucas, Cristiano Ronaldo, Jese scored for the team and ensure win within 1st half. Though it would be more but couple of goal missing on 2nd half can’t make it too different.

After winning El Clasico Real Madrid looking for another victory against Eibar, yes Real Madrid and Eibar facing each other on Spanish la liga match on 9 April at Santiago Bernabeu. Los Blancos never lost against Eibar before previously 3 times face each other and Madrid won all three match. Under coaching of Zinedine Zidane Los Blancos is looking in new shape Cristiano, Bale and Benzema are in great from. Into the El clasico fight Karim Benzema & Cristiano Ronaldo scored winning goal for them as well. It’s a challenge for Eibar to defense that how they will defend Madrid forwards. Los Blancos is in third position on league table where Eibar on 9th. No doubt Real Madrid is favorite on this match and as it’s going to held on Bernabeu, the home team FCRM would be more dangerous with oppositions. 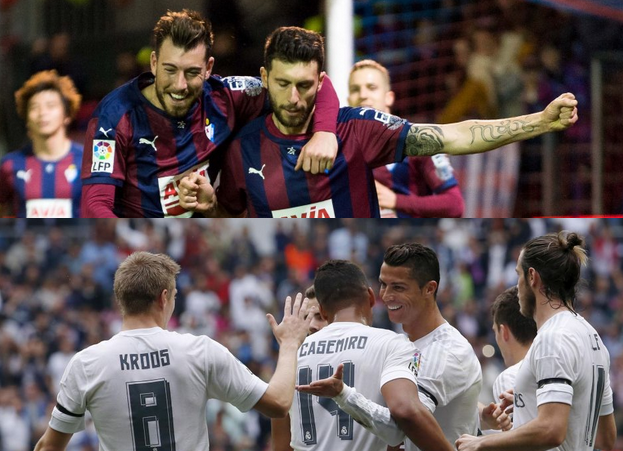 Match between: Real Madrid Vs Eibar

The team of Zinedine Zidane is looking for win in next matches of La Liga to make opportunity to defeat FC Barcelona on point table. They are under pressure in UEFA Champions League by losing against Wolfsburg by 2 – 0 in 1st leg. It would be a match of more goals where SDE would be destroyed by the most richest football club of the world.